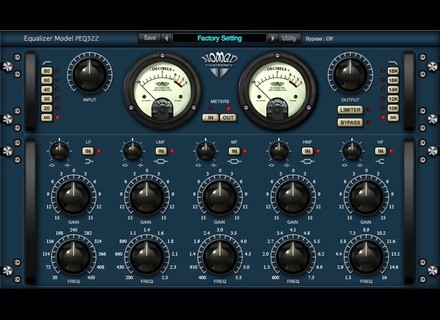 Nomad Factory EQ Model PEQ322
5
The Nomad Factory EQ Model PEQ322 plug-in is one that can be purchased either individually or as part of the Blue Tubes Equalizer Pack. If you're thinking about getting it, it's definitely worth it to buy it as part of the full bundle, which comes with six plug-ins in total. It's worth it to get the bundle because if you buy it individually it costs nearly half of what the bundle costs anyway. This is the most complete plug-in of the bundle as it offers up the most control as any in the bunch. The interface has five bands of EQ, with each having parameters for gain, bandwidth, and frequency, as well as the ability to put each one in or out as desired. There is also a high and low pass filter that just gives you a series of frequencies to choose where you want to cutoff. There are also parameters for input and output leveling, and a VU meter which can be set to monitor either of these levels. It also has a limiter button for touching it up and a bypass switch as well. I haven't seen a manual for this, but it's laid out easy enough where you really shouldn't need one.

I don't have the Nomad Factory EQ Model PEQ322 plug-in at home, but I've used it a bunch on the main system at the studio where I'm working. We have a number of rooms on site, but the main room is where I've used it most. The system consists of Pro Tools HD (as all of our system do), along with a Mac Pro computer with 10 GB of RAM (that's right!) and dual 2.66 Ghz Intel Xeon processors. This is more than enough to run this plug-in in multiple instances smoothly, but I only use this if I'm going to be utilizing most or all of the bands, as it's worth it to save processing power anyway and use a lower processing power plug-in from the bundle if possible. This one will take up the most in the bundle, but still shouldn't be too taxing on most systems...

The Nomad Factory EQ Model PEQ322 is a great plug-in to have in your arsenal because it covers all the bases as far as in the box equalization goes. It sounds great and gives you all the control in the world, making it great for simple equalization and more in depth EQing where you want to get extremely specific. It has a full sound, but like with all EQ plug-ins, it's really what you do with it that counts. Again, if you're at all interested in this plug-in, which you probably are if you're reading this, I'd encourage you to check out the full Blue Tubes Equalizer Pack as it's definitely worth it to grab the whole bundle rather than getting this one on it's own.