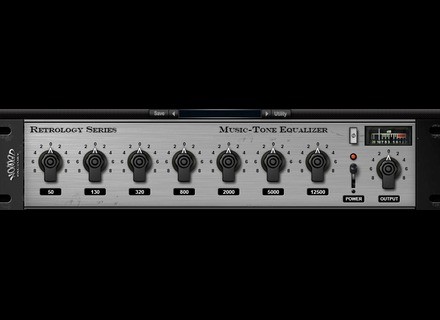 Nomad Factory Motown Studio EQs
3
The Nomad Factory Motown Studio EQ's bundle is a set of two plug-ins - Retro Music-Tone and Retro Film-Tone, both of which are, obviously, equalizers. These plug-ins are modeled after passive equalizers used on classic Motown records. URS also has a bundle of two plug-ins modeled after these EQ's, which I should say right off the bat that I like better. Each of the two plug-ins has seven bands to work with, with the two plug-ins having different frequencies for each of the bands. I don't own this bundle, but have used it at the studio where I work, so I wasn't involved with the installation process in any capacity. They definitely aren't hard plug-ins to use at all, as it doesn't get much simpler than an EQ that has fixed frequency bands. A manual shouldn't be necessary since it's so easy to use...

We've got the Nomad Factory Motown Studio EQ's running on a few different systems at the studio complex where I work, with the main room running it with Pro Tools HD and a Mac Pro desk top computer. The computer has 10 GB of RAM and dual 2.66 Ghz Intel Xeon processors, so if having Pro Tools HD wasn't enough, I do believe this computer could run these plug-ins comfortably on an LE system or something comparable. I can't really imagine too many users having problems running this within their DAW.

The Nomad Factory Motown Studio EQ's are pretty decent plug-ins for sure, but I prefer the URS version of these plug-ins, as I think they're overall more realistic sounding. Like the URS version, these plug-ins are best used in tandem, so really I'd look at this as one plug-in that's split into two pieces, as you can't change the frequencies on here, so if you want a certain frequency that isn't found on one of them, you'll have to go to the other one for it, not that every frequency is covered between the two of them. These are definitely useful plug-ins to have, but after using them a few times at the studio where I work, I've found that I don't prefer them to the URS version which I have at home. I'd definitely encourage those interested in the Nomad Factory Motown Studio EQ's to check out the URS M Series EQ as it's comparable in price and definitely a better bet in my opinion...
Did you find this review helpful?yesno
»