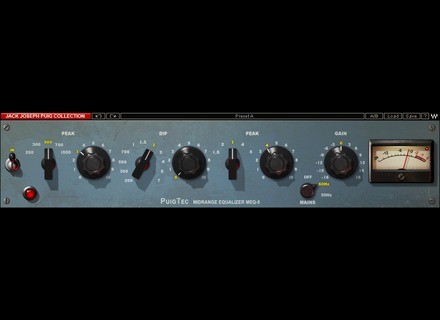 
2 user reviews
Find it in the classifieds starting at $99 Avg used price: $99

Waves PuigTec MEQ-5
4
This is another part of the set of plugins that Waves offers. This time, it's a midrange EQ based off of a vintage model. The MEQ-5 is a real cool plugin that can be used on vocals, guitars and even drums. The EQ itself gives you a few frequencies you can boost or cut, and it also has some other tricks up its sleeve. For one, you can control the mains. This introduces different hum for that ultra vintage sound. There are two peak switches and one dip switch. This means you can really taylor that midrange frequency to whatever you want. However, it's still limited to whatever the notches are. Because of that, it's not the most versatile EQ out there, especially considering its narrow overall band.

Waves plugins are some of my favorite out there. First of all, they're cross platform, and as a Mac user, that's a huge plus for me. The plugins are always rock solid, too. They perform amazingly well, take up very little memory and play nicely in Logic. While they're 32 bit, Logic applies a bridge that allows you to use them in 64 bit environments. This way, you get the best of both worlds -- you can use these 32 bit plugins, but you can still access all the precious memory that the 64 bit environment needs. I never read any of the manuals, so I can't comment on that.

This is a pretty cool plugin to use on vocals, guitars and drums. You can get a real unique, vintage sounding EQ going on, complete with all the artifacts that they come with. However, it's not nearly as versatile as today's EQs. Because of that, there's a limited application to this. Some might not find it that usable, and because of the price, it's kinda hard to warrant it. That said, it sounds great.
Did you find this review helpful?yesno
»

Waves PuigTec MEQ-5
5
The Waves Ltd. PuigTec MEQ-5 is a mid range EQ plug-in that comes in a number of Waves bundles, namely the Jack Joseph Puig Analog Legends pack. The plug-in is designed to be a software version of the Pultec equalizer of the same name. It's also meant to be a compliment to the EQP-1A program equalizer, a software version of which also appears in this bundle. No matter which bundle you get the plug-in in, you're going to install it all at once which should be quite simple as I didn't have any problems installing it along with the rest of the complete bundle of Waves plug-ins. It's interface is really simple and is a direct copy of it's hardware counterpart, consisting of three bands each with their own frequency and gain parameters. Two of them are just for boosting and one is for cutting. You don't have complete control over the frequencies as they are preset fixed frequencies. A manual shouldn't be necessary at all.

I've currently got the Waves Ltd. PuigTec MEQ-5 plug-in running in my Pro Tools 9 based home studio. I run it on a Mac Book Pro computer that has a 2.2 Ghz Intel Core 2 Duo processor and 4 GB of RAM, while I've got Pro Tools 9 running with a Digi 002 rack version audio interface. I haven't had any problems at all running the PuigTec MEQ-5 within this system, and would think that most people would be in the same boat, but as always it's hard to predict how it will run on lesser systems.

The Waves Ltd. PuigTec MEQ-5 is probably the most realistic software version of this Pultec model that I've used. It has a great overall sound, regardless of how you would compare it to the original. Bomb Factory and Nomad Factory also have versions of the MEQ-5, but this is definitely my favorite. It has a very accurate interface and shouldn't be hard to use even if you haven't used any original Pultecs. As far as in the box EQ'ing goes, this is a great tool even when not comparing it to other Pultecs. The JJP Analog Legends bundle is one definitely worth checking out, especially if you love software modeled after real analog gear as I do...