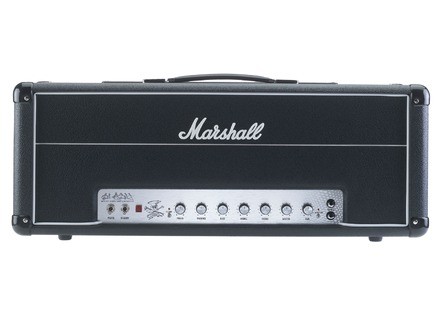 Marshall AFD100 Signature Slash
4
The AFD amp is marshall's signature offering for Slash. Meant to replicate the sounds from slash's modded amps from the appetite for destruction era. The AFD features two modes (#34/AFD) that share a common EQ.
The amps is running ECC83's in the preamp and 6550's for the power section. The amp has marshall's proprietary attenuation built in and can be controlled via the "power" control on the front panel. A series effects loop around back can offer an additional 10db of boost, which is foot switchable. The aesthetics are typical marshall fare, my only nitpick being the insightly Slash trademark graphic printed on the silver faceplate.

The inclusion of an attenuator is very welcome here. Marshalls always seem to sweeten as the volume goes up, and being able to attain several different sounds and feels at virtually any volume is plenty useful. Using the foot switchable loop as a boost makes the amp all the more versatile and negates the limitations put in place by the shared EQ. I have not gigged this amp, but it is clear to me that the amp's feature set would perform exceptionally in a live environment.

I played through the AFD with a Musicman Axis and SG standard. Mesa Boogie 4x12 cab. No pedals.

I personally set the amp up to do higher gain sounds, relying on my guitar's volume to access milder tones.
The cleans are exceptionally good for a Marshall. The #34 mode does the classic marhsall gain very well, and sounds more brittle and old school, while the AFD mode gives you an extra gain stage perfect for hair metal and the like. I personally favored the #34 mode better when driving up the volume and using the attentuator, but their are a number of flavors that can be dialed in.

Slash fan or not, this amp should be on the radar of anyone who loves old school rock guitar tones. The amp is no swiss army knife, but it certainly doesn't leave you feeling compromised. Used prices are not excellent due to the limited production run. If you are looking for the modified marshall sound, there are several great mods on the used market by builders such as Mike Fortin and Dave Friedman.

OdysseyV's review (This content has been automatically translated from French)

When I play the intro paradise city clean sound with a grain to be frank c commme is on the cd ... on the other hand I have finding clean sound effect like a compressor does Introduced her transistor why I have augment the bass thoroughly to obtain a more prcis ... I have a jcm 2555 jubilee, I must admit that the sound on this amp distortion is closer to the truth slash its ... to see what the beast must put a background which is not the case in my mind that 2555 presents a clear sound normal ... for clear sound on the afd have to play with the knob of the gibson decreasing.

Design surper has mkII ...
Did you find this review helpful?yesno
»

Djezeking's review (This content has been automatically translated from French)" Oh yeah, anyway ....!"

Printing buy an amp character and quality.
Attention marketing Slash plays in the balance.
But that does not make today???

Simple configuration at the start and end not that much.
Let me explain.
If the config is as equal in marshall dab not very advanced, the rest needs to be tested.
Gain greatly affects the sound, not just the gain strictly speaking, but also grain, equal and texture of sound. You can spend blues type filter wha wha kind a very very high gain rock.
I love it. As mentioned in other reviews, you need to know to play on volume and tone knobs on the guitar.
From a micro switch, I went from big crunch to gain perfect.

Careful not strictly speaking a clear sound.
Two channels:
More dry and clear bass
A heavier
And a single gain .... YIKES!!
But playing the guitar volume and tone you get there.
Otherwise one solution number two preamp plugged into the insert loop (quality) and a pedal switch A / B and voila.

I adore this amp to really rock, blues may be less on the pop albeit a Fender, it must be okay.
Slash's very typical, that is true, but not only. This grain was very special, very sharp, but really top top and allow to stand out in a mix easily together.

While compressed, with a reverb room or flat is fun blues rock.

I expected a lot before writing my opinion just to get back.
So for 4 months, I treat.

Value for money quality for the Marhall, I'm not disappointed.
For a more versatile amp, a réedtition the JCM 800 is not bad but I cracked the signature Slash, I admit ... lol

I home the JCM 2000, fender hybrid head lamp and frankly, it is my great complementary matisse today.
Side scraper, a 2012 Les Paul Standard and Les Paul Slash in Seymour Signature ...... ha ha ha
A washburn mounted handle jazz and rock bridge in its very Fenderien that sounds great on the AFD 100.

I remake this choice and I assume.
Amp that seem simple at first, but that can be fine as long as the owner uses his brain and refines the gain setting and tone of the guitar
After, I think I'll crack on a Fender Deluxe JTM or as soon as I have the budget.

chocopopz's review (This content has been automatically translated from French)

The config is simple.
There is that bias adjustment for prompting to read the doc: you must activate the Loop switch when power to initiate a procedure that tests the bias lamps preamp and power, and balance the all. It allows for all lamps tuned impec for warm / hot they do not burn too fast imbalance.

This is huge for the heavy rock crazy. Okay, playing with the knobs of the guitar, you can have sounds relatively clear, but it's still a little crunchy. For the true light, I prefer to put in the loop Return a preamp output as clean of a JVM, or directly a Boss Fender Bassman for example. The is divine. There are no words to describe this sound.

Other happiness with self bias, we can put all the lights you want (almost) and meme mix!. My favorite is config and 2x6550 2xEL34L. 6L6's are not bad either, but on this side I have a preference for 5881 that remind me of a fabulous JCM900 that I stupidly sold.
In pre-amp, I just replaced the V4 by ECC83S that softens slightly treble.
Note that you can not drastically change the sound of the preamp by changing the bulbs (I've tried many). In fact, I do not recommend cracking tune the preamp in lamps.

The AFD is a killer channel: bold and powerful, this is monstrous. Sure value. Always when you have to, but can tire a bit.

I use more mode # 34 because I like the challenge. This mode is more subtle: the further down the gain, the more acute AC can be reduced and being bothered a little, has less power up. On the one hand, if we want to break into the mix, the guitar should be more acute than the rest, right?. Clear the channel # 34 is meant to be played loud, very loud, but thanks to the power button one can manage a volume / quality acceptable for use in private, but you lose the mojo is on. By the way, I compared with a Power Brake power button and preserves better the sound.

What to get in his head, is that the microphones (eg on an LP) should certainly not remain at 10 as we often do. He must walk between 2 and 8 of the same volume and treble and bass for the sound and try the second input jack.

Of all those microphones that I prefer are obviously the h2EA-seymour s (surprise?) But the BB and other 490/498/500 going well. Honors for the P94 that interact beautifully with the preamp.

The receiver accepts the reverbs well in entrance facade, but not many other effects.
The wha Slash goes well in direct entry into the Return (the musical distortion becomes finally), from the palm undoubtedly has the Digitech Jimi Hendrix (Notice to berserk sound).

8 because I wish the gain knob does not add sharp decrease.

It must be 6 months. I'm excited about this amp, but it does not replace the JVM or the JCM2000, nor the JCM800, JCM900 neither nor the VM, because at every Marshall amp has an own personality. So if we have money, we must have 2 or 3 Marshall, and also a small Fender / Mesa / Engl than done both.

If we do not have too, yes, this is a great plan AFD100: for 1400 euros, you have two amps JCM800 customs, modified, with attenuator (power brake and the economy of small 1W birthday meme coming out at a price of sick), limited edition, with the possibility to change the Apple products of the beast by mounting piles of different lamps.

Did you find this review helpful?yesno
»
Read the 9 user reviews on the Marshall AFD100 Signature Slash »