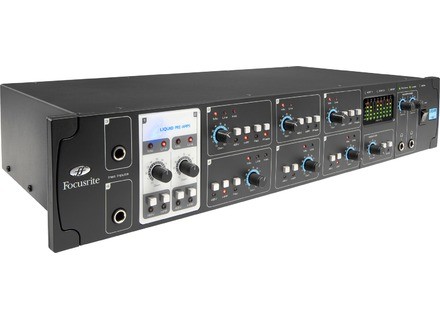 Focusrite Liquid Saffire 56
5
There comes a time in every audio engineer's life when you just need lots of I/O at a time; recording drums with a variety of mics, a couple of musician's at the same time, or perhaps you're tired of plugging and unplugging your external gear every time you want to change setups.

I'm a hardcore pro tools user, and I felt that avid's options back then didn't fit my needs. The 003 rack just had four preamps, and the other high-end options were just way too out of my league. Fortunately, Avid realized they had to let pro tools go out and play with the other children in the park and so, since pro tools 9, we can all look at the plethora of options out there and choose whatever suits us. Good times.

This firewire interface caught my eye because it was one of the first to offer eight preamps, either XLR or line. Two of those can be used for direct instrument inputs, wisely located in the front. Each one has individual phantom power and HPF, though just two of them have pad option and only three phase reversal, which is no big deal if you plan your input list ahead. The real beauty of this interface though, is that it has two ADAT I/O, meaning you can add two additional ADAT-capable interfaces (like the underrated, inexpensive Behringer ADA8000) and get 24 analog I/O at the same time at 44.1Khz, which is more than enough to tackle 90% of mixing and recording situations. This without counting that it also has two dedicated outputs for your monitors and the traditional digital SPDIF I/O, which adds 4 I/O and thus, the 56 in the interface's name.

"Liquid" comes from Focusrite's own preamp simulation technology, which is available on XLR inputs 1 and 2. These range from the Avalon 737SP, Helios, Neve 1271, Focusrite's own RED 7, UA's 610 and a couple more. The simulation, or 'color' of the preamps can be varied with an "Harmonics" knob, located in the software controller of the interface. Frankly, with the amount of processing we put on today's music, I feel preamp voodoo comes after to musician's performance, instrument quality, a faithful mic and it's placement. That being said, I've been surprised more than once with the timbre changes these simulations give; you can really feel a difference and most of the time for good. I'm particularly fond of the Neve 1071 simulation and I reserve these inputs for lead instruments or vocals.

Most of the deeper features of the interface are controlled through Saffire's MixControl software. It's main purpose is for signal routing, say, connecting 'Analog 1' to 'Line Out 8'. This is of little relevance if you're mixing in your DAW since most of the routing should be done there, but some cool things can be done here, like routing two independent monitor mixes from your DAW to the headphone outputs, sparing the need for headphone amps fed through analog outputs in some situations.

Oh yeah, it also features a loopback virtual input so that you can record whatever comes out of the interface, just watch out for feedback!

I use this interface everyday, from simply watching a movie at the studio to mixing a ton of tracks while recording another 8. Not once have I waged war against it to get a youtube video to sound through the monitors (hello, avid interfaces) or routing 16 tracks to their destinations. Drivers are very, very stable but mixing can get frisky when there's a ton of tracks with tons of plugins (I'm on a dual quad core intel Mac pro with 2Gb RAM) but I fear most of it is the computer's fault.

I'm mixing on pro tools most of the time so latency isn't an issue. But when I do need low latency monitoring I can always monitor directly from the interface (this is when the MixControl software comes really handy, even for multiple inputs) or use some of the other usual workarounds. On Ableton live it runs as smoothly and other apps like skype don't have any troubles recognizing the interface.

Syncing it to other interfaces via ADAT has also been easy. I've paired it up with a 003 for 16 channel recording with no issues other than 003's need for attention and MixControl's cumbersome GUI, which is the saffire 56's weak point, but an easy one to overcome.

One of the saffire's intended purposes, apparently, is to be used standalone as a live mixer of sorts. All the band can plug into it, get mic/line gain and phantom power and come out of every output you want without the need of a computer connected to it. It's sort of silly if you ask me, since most of live mixing IS riding the faders constantly to make up for all the variables in a live situation. You can however plug it to a cheap laptop just for the sake of loading MixControl software and you got yourself an 8 channel live mixer without EQ, if you must.

I had no issues getting the interface to work. It is a fireware interface though, so it's wise to remember that you have to install whatever software comes with it first and that you shouldn't plug/unplug it when it's on. It uses a firewire 400 cable, so I expect that it can be somewhat incompatible with newer computers that don't have it, but a quick check to focusrite's site shows that they're giving away thunderbolt-to-firewire adaptors, so perhaps it's not that big an issue.

After installing everything and making the proper connections everything went smooth. As I said, all the software recognized every input immediately. Then I popped the rack-ear covers (they're there in case you want to use it outside the safety of a rack, like cavemen) and screwed it in place. Unfortunately, I do have to practice my best yoga poses when I have to change connections on the back until I get a patchbay.

I love it, I almost hate it because it has so many features that I just spent 4 hours reviewing it. It's not built like a tank, but it has got me through many audio battles in the studio and out of it in almost 3 years, and it doesn't have a single dent or loose knob. It's not the greatest sounding thing in the gear industry, and I'm sure many pre's out there sound better in hand to hand combat, but then again you shouldn't blindly trust gear that sounds "amazing" just because you plugged something in.

This interface is great, amazing if you will because it can adapt to a lot of situations and does it so while sounding nicely, and it even has you covered if you want a more colored sound with the liquid preamps.

This is one of those pieces of gear that on hard days, give you the feeling of being of your side and not against you.
Did you find this review helpful?yesno
»

Focusrite Liquid Saffire 56
4
The Focusrite Liquid Saffire 56 is an interface that connects to your computer via FireWire. It is very stable and will not crash or cause you system any problems at all. The drivers have not been updated for my desktop computer yet but so far I have not had any issues to want to update. The pre-amps are very good; you can choose which style of pre-amp it is you want to use. There are a total of ten different pre-amps to choose from and all of have a different “feel” and warmth to them since they are based off of classic pre-amps.

There are 28 inputs and 28 outputs on this interface which is plenty for your set up. Depending on how many instruments and microphones you have set up you could need more or less. But for me I have a drum set and about 7 other instruments that are all ready to be recorded so I needed an interface to be able to handle that.

One thing I can say about this interface is that it can cause some issues with you computer if you don’t have a fast processor. My processor is an i7 core and it runs smoothly but I can only imagine using it on a slower computer. It would cause a world of problems especially when using certain pre-amps.

When you purchase this you will also get some great plug-ins from Focusrite too like the reverb and gate plug-ins. You can use these plug-ins in any program you want because they are VST’s. The only reason I really chose to go with this interface is for how many inputs it has. The pre-amps feature played no part in my decision though it was a nice bonus to be able to switch pre-amps on the fly and get some different sounds instantly. This price of this interface does cost more than I wanted to spend but after working with it I see why it cost so much.
Did you find this review helpful?yesno
»

The latest driver is stable v3.4, I had a big worry at the beginning of purchase with v3.2 or I lose sync card when changing sample rate. After numerous exchanges with the support fr uk. A beta driver has been redeveloped for testing and since v.3.4 has been released. Since this new version so more pb
The hotline even if a bit slow in response time does not let you in any case before finding the cause of your problem. These are real teachers of music not responsible sidestep the telephony platform ...
This is a very very big plus and a big thank you to them.

Easy and clear
Must digest a little the interface MixControl. But this is quite intuitive

8 months
Value for money very very correct.
The only negative point would be the quality of inputs knobs which are very sensitive to adjustment. But it really is not penalizing

PurpleHazeRiddimMaker's review (This content has been automatically translated from French)" perfect for my config!"

Focusrite Liquid Saffire 56
5
10 audio outputs, 4 can be used for 2 independent headphone outputs.
I use it with a dynamic extension Octopre Mk II connected in ADAT to have 18 outputs.
Easy to handle software.
Just a big catch initial head, cubase output mono out channel 9 is denoted ADAT 1 (in cubase) and corresponds to 13 DAW! the Saffire Mix Control not the DAW software ... 9 (ADAT and 2 to 10 DAW ...) in short we go from 8 to 13 DAW for live audio outputs.
I own preamp tube adapted to my needs and does not use those cards, even emulation Liquid.
I mix analog console on a TASCAM M-320, for the Reggae / Dub old and it sounds nickel.

I use it for 1 year without any problem, I hesitated with a much more expensive RME and I have no regrets for the config of my home studio is enough and it leaves a budget for the rest ...

Did you find this review helpful?yesno
»
Read the 18 user reviews on the Focusrite Liquid Saffire 56 »

Published on 06/04/09
Focusrite has announced that the Liquid Saffire 56 is shipping and available in stores across the USA.

View all 6 discussions on Focusrite Liquid Saffire 56 »
Cookies help us improve performance, enhance user experience and deliver our services. By using our services, you agree to our use of cookies. Find out more.