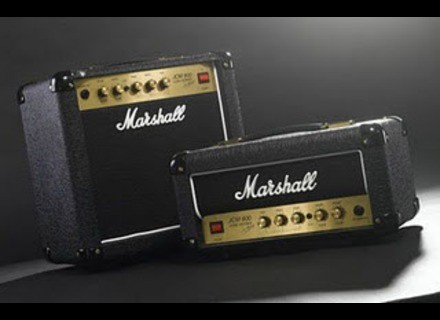 Zug_metal's review (This content has been automatically translated from French)" The sound of the 800 home!"

Marshall 1980s JCM1H
5
Single channel 1 watt lamps a 3 band eq gain a volume boost button. A button on the back to reduce power outputs 2 8 and 16 ohms.

An effects loop were not bad but good. The low output is not present and the presence button.

A single channel! well here you play a little on the eq you put the gain (you can even put it back on the head!) and especially with 1 watt you can turn up the volume at least 3 quiet and there as you sound!
You lower the volume on your hip you have the marshall clean.

My thing is the hard rock (acdc airbourne) and the metal of the 80's (gun's, accept, Saxon, metallica etc ...). Ben you're right into it! I had the 800 and 100 watts the sound is really the same (of course without the headroom eh! that you not move the rib cage though ...). The head is sensitive to baffle I had a 2061CX I sound acdc live. Otherwise gain volume 8 3 8 bass mid treb 5 6 sound of balls to the wall! A small od? kill 'em all! or even ride the lightning depending on settings. Warning I have not managed to get the big metal still young with the Fulltone OCD with a lot of gain I'm not far from the sound of load or reload.
In short it is the sound of 800 medium well this thing in your face that cuts into the mix like butter must love me is my thing.

I've had 3-4 months I tried the big brother I wanted and even bought the same at home and what is exactly that! The head is small cute (waf approved!) And it sounds as long ... we put a bit of volume! I think for a head lamp it takes volume to be not squirm. When I want to play it gently simulation but when I put the sound hop jcm 1.

Only downside there is not input low for some red hot when Don is quiet but I did not buy it for that. I wanted the sound of the hard 80's I have at home without taking off the wallpaper.

ourson teigneux's review (This content has been automatically translated from French)" The best of the series "anniversary"."

Marshall 1980s JCM1H
5
Dwarf version of the famous JCM 800. Tell yourself that in Marshall, fewer buttons, more is good. Five knobs, lamps, no effects loop, no reverb '. And not by the presence cons. Power: 1 Watt / 0.1 Watt when switched. And a little bonus: a manual switch that gives you a small side Silver Jubilee not yucky ...

I think this is the only head Marshall Angus Young can wear alone ...

configuration is very simple. All sounds are usable if you like Marshall. Store it directly in the manual unpacking. Let your ears do!

I have a big sister than 100 Watts rehearsal and JCM-one in my room. The relationship is more obvious and what a pleasure to play with the master volume beyond 1 or 2! For evenings or Madam bed in the next room, the scope of 0.1 watts is frankly played well even though we may not have the big stack dynamic tube, do not dream too much anyway.

Should my style of music: Simone you amaze me! This stuff is a legend in mini version! I'm a scratch cover AC / DC so this is perfect. But as there is not the Young brothers in life, know that it will give you satisfaction in other styles (funk, blues, reggae ...) if you like the grain "Marshall". Fender fans spend their way but that is not necessarily a new ...

The amp many respects and restores the guitar you use. I play a Gibson Explorer, ESP eclipse of 1995 fitted with a kit EMG Zack Wilde (81/85) and a Mayones Setius mounted with a diagram of SSH in Bartolini. A different pleasure every time. I expected a colleague lent me a signature Clapton to know ecstasy full version single coil ...

Only small problem (well yes and no): little boost button. It is very nice because it gives you a more creamy and warm, rich in harmonics. on the other hand, for the price, we could have the footswitch mode. So I am not 10/10. GNAA!

I've had four or five months, but I could not pay me baffle the end of September. I cursed since the days when I do not have time to play a little. Moreover, since you mention the subject: you pay the head, not the combo. The combo is nice but contains an 8-inch HP which I think gives her too pokey. I took a 1X12 cabinet at VHT. Great and cheap. 1 watt is not much, admittedly, but the sound must be well at ease to exit. I also tried a Marshall 4x12 in the studio to die for! Ask my bassist ...

For the home, this amp is much more convincing, it is my opinion that all new more or less oriented modeling and uses your PC to operate. It is in its TRUE. One branch and plays. He speak your fingers, not the effects of different treatments or the software for guitar. It is a philosophy. We adhere or not. I love it.

It is a bit expensive for what it is regarding the quality / price. I will not be taken without the discount I got (thank you Francis!). I think Marshall-bill us on the scope of the limited series. But once in hand with your favorite guitar, money is not really the issue.

The few flaws (besides the boost switch which is only manual).

- There is a fair bit of power to rehearse with my furious. As bassist bastard just had her EBS 4x10, I have no luck ...

-The presentation is a bit cheap. Nothing in the box tells us we just buy something ultra limited series. We could have had an autographed Marshall's father. Especially now that will have become difficult ...

He has the defects of its sister model 2023: no reverb 'no loop.

For the rest: that's good! Pay you the legend of contemporary music. As big as a toaster and widely as hot!

Doc Loco's review (This content has been automatically translated from French)" 30 years for a JCM800 home!"

Marshall 1980s JCM1H
5
Full lamps (2x12AX7 in preamp, 2x12AT7 independent power). A single channel (with bass / mids / treble / gain / master) but with a switch that allows a trigger mod "jubilee" that turns the amp in Jubilee (including popular amp Slash, giving you an idea the resulting sound - what a mini AFD).

The power of one watt. Some sneer ... they would be wrong. This is still sufficient power to significantly irritate grumpy neighbors, and this is the mode 0.1 W (0.022 W to be precise!) Makes sense, allowing its use in the evening or at night.

One would have wished for a loop ... but there were not the original.

The use is surprisingly faithful to the original JCM800: the great defect of it has always been that it should be played LOUD to get the sound for which he is known, the sound is a little skinny with the master en- desous 4 or 5. Same here ... except obviously push the volume is no longer a problem

Note: once as 0.022 W, the output is protected by an HP support, which means it can be used without HP, for example to connect to an amplifier (or another amp via " return "of the effects loop), and the result is to die for!

So it's simple: you have already played a JCM800? I mean, the true all-tube, the 2203 and 2204, no diode models that followed (and which also have their interest)? Then you know how sound the JCM1. Ideal for hard / heavy early eighties (NWOBHM, AC / DC Back in black period) but also incisive blues-rock. The sound is very precise, very dry with low ideal for palm mute. Once activated the switch jubilee, we pass in the late eighties, the hair metal and G'N R, a more hairy and rich gain.

I was among the critics, finding this series very expensive amp. Until I try it. There, all my reservations were shattered, not only I bought it but I also took the JMP1 (another success) and resold a few amps.

For the home, and if you're a lover of the Marshall sound, there has never been better, it's that simple. For me, the price of an amp should be reflected in the frequency with which it is played: since I have, I do not play it, I have not touched any other amp. So see it that way, no it is not so expensive. One of the best decisions of my life in terms of gear.