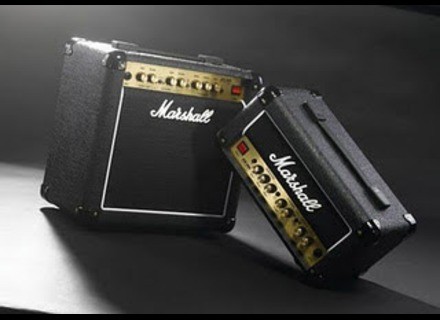 Marshall celebrates its 50th anniversary at NAMM with a series of "Celebration" models.

Each 50th Anniversary model comes as a limited edition head and tube combo. Each model provides 1W of power and includes attenuation to bring it down to 0.1W. Every amp is designed to represent a special period in the brand's history, highlighting its renowned amps.

The 50th Anniversary DSL1 is based on the JCM2000 Dual Super Lead amplifier. The DSL1 is a dual channel tube amp that (like its forefather) can be controlled from an included footswitch. The DSL1 has separate volume and gain for each channel and an overall 3 band EQ. 'Shift' and 'Deep' switches designed to allow for mid/bass voice to be altered are included. The combo version has an 8" Celestion Speaker.

The 50th Anniversary JMP1 is based on Marshall's JMP series amps with controls of just Volume, Bass and Treble (no master volume). A gain boost switch on back of the amp is designed to allow you to go from "crunchy rhythm to searing leads" and a 1w/0.1w switch is featured. The combo version features a 10" Celestion Speaker and alternative speaker outputs.

Last model in the series, the 50th Anniversary JTM1 is based on the JTM45. It features 2 x EXX83 preamp valves and 1 x ECC82 poweramp valve. Controls are simply 'Loudness' and 'Tone' (no master volume). The combo features 8 & 16 Ohm Speaker Outputs and a 10" Celestion internally.