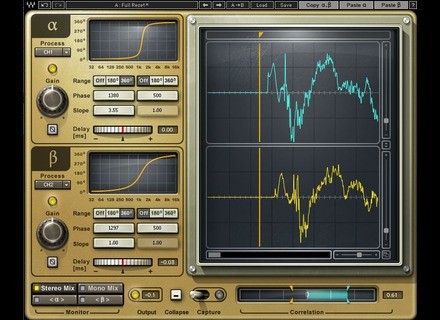 View all offers for Waves InPhase »

Waves InPhase
4
The Waves InPhase plug-in is easy to get set up and working. Installation of Waves plug-ins are as straight-forward as any other company. Once installed, it is simple to load in your DAW of choice. I am using Pro Tools 8 LE. It can be used as a traditional plug-in, running in 'real-time', and can also be used as an audiosuite 'off-line' processor. I rarely use plug-ins as audiosuite offline processors, but as I started to use the plug-in, I've found I like using it as an audiosuite plug-in. When adjusting 'phase' for an audio file, unless you are trying for a special effect, there is not a whole lot of tweaking you can do. Therefore, in my initial use, I had two recorded tracks, opened the audiosuite plug-in, performed phase alignment and moved on.

The InPhase plug-in introduces around 1000 samples of processing delay when inserted in real-time in Pro Tools. There is not automatic delay compensation in Pro Tools 8 LE, so I am a little hesitant to want to use it in real-time because the ~1000 samples of delay can screw up any phase correction I was performing. If your DAW has automatic delay compensation, this shouldn't be a problem for you. If your DAW does not have ADC, then you should be aware of this.
I suppose if you want to use the plug-in to fix phasing issues that occur after the processing of other plug-ins, then it would be appropriate to use it as a traditional real-time plug-in at the end of your processing chain.

Waves provides some useful videos to help you get started with the plug-in. I definitely referred to these videos when I started using the plug-in because it wasn't entirely intuitive how to get audio into the plug-in in different scenarios (side-chaining, mono, stereo, etc.) I would definitely recommend these videos.

Waves generally make plug-ins that have rock-solid stability. I have never had an issue of a Waves plug-in crashing Pro Tools. Sometimes their plug-ins can be computationally intensive, so older systems might have a hard time performing all the processing.

There was one weird thing (possibly a bug) that I noticed when I have been using the plug-in as an audiosuite processor. If I set the alpha channel to receive from CH1+2, set the beta channel to receive from the side-chain, and lastly pick the key-input side-chain, there is no audio received in the beta channel. However, if I pick the key-input side-chain first, then set the alpha channel and beta channel second, then the audio is fine. To me, it would make sense if it worked right either way, but it doesn't. It might just be a problem with PT 8 LE. Just something to watch.

This plug-in was designed for a very specific purpose - to adjust the phase of an audio signal. It does exactly what it is meant to do. Phase alignment is a subtle but important detail to consider in a recording. In some cases, it can make the difference between a really good sound and a great sound. If you haven't considered phase alignment in your recordings before, Waves InPhase is an easy way to help take your sound to the next level.
Did you find this review helpful?yesno
»

See all 8 photos of Waves InPhase »