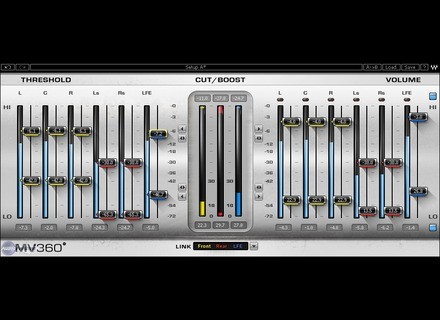 Waves MV360°
4
The Waves MV360 is a high level compressor that has automatic makeup output and gain level control. The Waves MV360 came to my attention when I was doing some research on the Waves Renaissance Vox because it is very similar. The MV360 is very easy to use and to understand, mainly it is controlled by a Threshold Fader. The MV360 has 5 main modes and using them you can also choose up to 3 different side chains. The modes are All Linked, Front Rear Sub, 5 Linked/Sub, Center Quad Sub, Center Front LR/Rear. The manual for MV360 is very thorough and in depth, it has everything in it broken down and makes the MV360 seem a lot more complicated then it really is. But for the serious users you can really get a hang of how MV360 works and will amaze you on what you can really do.

I currently run MV360 on my Apple Macbook Pro 2.66 Ghz i7 Dual Core 4GB laptop. It works great and has never caused any issues, I have also used it on my desktop PC and it works fine on that too. I just the Waves MV360 in Pro Tools on both systems. It has never crashed or had in sort of an error since I have been using it which has been over a year now.

My favorite part of the MV360 is how easy it is to use, but it is still a high quality compressor that is very in depth. If you take the time to fully understand the features of MV360 you will learn some great compression techniques. The compression itself on the MV360 should cost a lot more than what it does. I have seen hardware compressors that are of quality like the MV360 that cost double what the MV360 Cost. I am very happy with my purchase of MV360. It is well worth every penny spent.

Waves MV360°
4
This is meant for anybody who works with 5.0 or 5.1 audio on a regular basis. One of the biggest issues faced with working with audio that's not stereo is trying to find plugins that can adjust every channel. A lot of times, you have to break every track down into one single buss for certain effects, and it becomes a huge pain trying to sort everything out with levels and volume. This is basically a bunch of independent compressors that can be applied to a mix and allow you to tweak the individual bands to you leisure. It has sliders for low threshold range, high threshold range, low volume range, high volume range, high level compression on/off, low level compression on/off, high level compression master control, low level compression master controls and a link selector. There are also a few other tricks up its sleeve that you can mess with. I never read the manual, but it really doesn't need one as, despite it looking a bit daunting, it's very easy to use.

I don't use a lot of 5.0 and 5.1 surround stuff, but when I'm working with Final Cut Pro and have to do some complex audio work, I like to use this plugin. It's saved me a few times with adjusting volume levels and transients before. Keep in mind that I just mess around with FCP and plugins like this just to see what they're about. I'm not a big user of video based audio, so my opinion may be a bit skewed.
Did you find this review helpful?yesno
»

Waves MV360°
4
The Waves Ltd. MV360 plug-in is a dynamics processor that is designed for surround sound purposes. It is for use for mixing 5.0 and 5.1, which I haven't done all that much of to date. We do however have this plug-in at the studio where I'm working, so I've gotten to mess around with it a bit to see what it's all about. I wasn't involved with the installation process of this plug-in since I don't own it and it was already installed on our system when I started working at the studio. The interface is split up into sliders for threshold and volume for each of the bands, as well as a section for cutting or boosting within each of the sections of surround sound. I didn't have access to the manual, so I don't know what the make up of it is like.

The system that I've ran the Waves Ltd. MV360 plug-in on is Pro Tools HD based, with a quad core Mac desk top. We've actually got this on a few different systems with the studio complex, but I've only used it on the main system. I only tried running one instance of the plug-in, so I really can't say how well it would run beyond this. It isn't the type of plug-in that you'll be needing to run a lot of, but even one of these at a time could tax your system depending on it's make up. Chances are that if you have a need for a surround sound dynamics processor, you're system will be able to run this plug-in.

While certainly not a necessity for most DAW users out there, if you're going to be mixing surround sound in any fashion, the Waves Ltd. MV360 plug-in is definitely a good thing to have around. I can really only see this being used in a post production setting, which is why we have it on hand. I can't really imagine another situation where you would need this, but you never know. The price is about average for a Waves plug-in, which is of course more expensive than most plug-ins out there. Having said this, Waves is definitely one of the best out there when it comes to making plug-ins, so you don't have to worry about bugs or the sound quality, as Waves is always at the top of the game when it comes to realistic sounding plug-ins. I don't know much about surround sound mixing, as this is the only plug-in of this kind that I've used, but from what I can tell this is a top notch plug-in of it's kind.
Did you find this review helpful?yesno
»