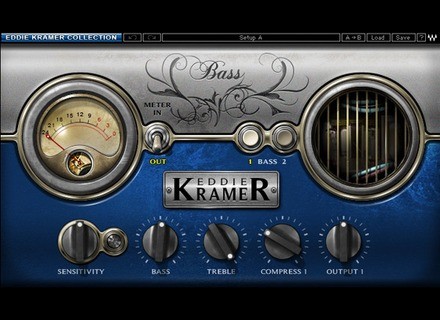 Waves Eddie Kramer Bass Channel
4
Eddie Kramer has done everything from Led Zeppelin to Kiss to Hendrix and beyond. He's extremely famous in the music engineering/production world, and considering that Waves has been doing some engineer collaborations lately, it's really no surprise that he got his own plugins. This plugin takes an all-in-one approach to mixing bass. It basically combines a compressor and EQ to get the perfect bass sound. The plugin has knobs for sensitivity, bass, treble, compress, and output. It also allows you to select between two different bass types.

This plugin is very easy to use. All you do is enable it on your bass buss, and you're good to go. It's one of Waves' easier plugins to use. I never read the manual, but it really doesn't need to be read with a plugin as simple as this one. It's fairly straight forward.

Waves is pretty famous when it comes to both compatibility and stability. For one, these plugins are rock solid. I've never experienced any problems using these. There have never been any freezes, glitches or anything bizarre going on, even with a fairly heavy usage of other VSTs in the DAW. This is also cross platform compatible, so anybody on an Apple or Windows computer can easily use this without any problems. There is one problem, however. In OS X, this plugin is 32 bit only. That means that your DAW needs to enable a special bridge application if you want to use your environment in 64 bit while utilizing these 32 bit plugins. It's does it automatically, but I'd like to see the next revision be a 64 bit plugin if possible. I've been using the Mercury bundle for half a year now, and it's been a wonderful experience.

This is a very good solution to mixing bass. I generally find bass guitars to be pretty easy to mix, personally. If it's just one track, I'll add a high pass, low pass and compressor to it. That usually does the job for the most part. If it's two tracks, one will be clean and one will be dirty. I'll then mix then to taste to get a huge sounding mix without overpowering the guitars. This plugin has helped me a few times, but I generally find myself just utilizing my own little method for doing bass guitars.
Did you find this review helpful?yesno
»

Waves Eddie Kramer Bass Channel
5
The Waves Ltd. Eddie Kramer Bass Channel is a software plug-in that comes in the Eddie Kramer Collection of plug-ins. Eddie Kramer I guess was involved with designing or approving these plug-ins, who of course is the famed engineered who was Jimi Hendrix's engineer for starters. I installed this plug-in along with the rest of the Waves Complete bundle, so there was anything different about installing this plug-in compared to the other Waves' plugs since it was done all at once. The interface of this plug-in looks just like the others in the bundle, and does share some similar characteristics, but of course as far as sound goes it's it's own beast. The parameters that are given to work with are knobs for sensitivity, bass, treble, compression, and output level. There are two different bass channels on here one of which will give you a bit more compression than the other. A manual shouldn't be something that is needed here.

The system that I'm running the Waves Ltd. Eddie Kramer Bass Channel on is Pro Tools LE based. It's my home recording studio and it consists of a Mac Book Pro lap top that has a 2.2 Ghz Intel Core 2 Duo processor and 4 GB of RAM. I'm using Pro Tools LE 8 with a Digi 002R audio interface. This system has definitely been powerful enough for me to run most plug-ins including the Eddie Kramer Bass Channel plug-in comfortably. I've only tried running it on an amp'd and a direct bass track at once, and I don't think that too many people will be needing it for much more than this within a single session.

For getting a quick bass guitar sounding happening, the Waves Ltd. Eddie Kramer Bass Channel is the perfect plug-in. It gives you the best of a few different worlds, as there is a lot that you can do with the plug-in between the EQ, compression, and two separate bass channels. When I'm doing a real mix down I'll usually run bass through some outboard gear to do the job that this would do, but if I'm working in the box this is usually a great place to get the bass started with. The Waves Eddie Kramer bundle is definitely one worth considering if you want a group of general instrument and vocal processing, as they'll pretty much give you everything you need to do a mix.
Did you find this review helpful?yesno
»