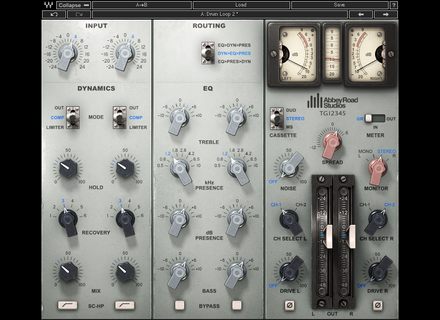 This channel strip has to be one of the most beautiful plugins Waves ever released!

No, you’ll never insist enough on how important it is to work with beautiful plugs (I mean audio plugs, of course), if only to compensate for the hours spent in front of the screen, breaking your back, ruining your eyes – spoiling your health altogether.

As usual, it’s "a faithfull reproduction of the famous EMI channel strip made by my aunt’s janitor’s cousin’s stepbro..."
For all this commercial talk, go and see with Waves directly, even if i’ll admit that this one console is pretty famous, and perhaps the entire British Invasion was recorded on it so yeah, soundwise, it’s a real heavyweight.

It’s a preamp/EQ/comp combo.
Available in mono or stereo versions, but I personally only tested the stereo one and even only in MS mode, so divide by two for an advice on the mono version and we should be there.

(For those who wouldn’t know, the MS mode allows to split the center (Mid) from the Sides, and on a drum buss for instance it’s as lethal as it gets.)

Now, back to the plugin.

Preamp stage – hard to judge a preamp sim, as it may be one of the rare things that can’t be emulated – along with getting a Tokai karaoke mic sound like a U-47. However! The good point here is the volume settings are used to modify the compressor’s reaction, and clearly tweaking the input gains really do change a lot to the overall sound. A good point.

Compressor/Limiter stage – this time it’s different. Touching a knob immediately results in an audible change. Hold, Recovery and Mix. No values, just tweak and listen, this is it.

EQ stage – keep it between us, but the ergonomics is initially quite a bit messy.
The Bass and Treble do what they say (respectively), but in between is a parametrical “Presence” setting that makes things less clear.
Again, you get used to it and it’s approximately as subtle as a sledgehammer. Let’s make it clear, the TG12345’s EQ sounds more like a filtre than anything. A bit like the EQs you’d find on old Korg products (Polyphonic Ensemble, Delta... ) – yeah, i know, this has nothing in common but it reminds me of such effects. And this is MY review so I’ll say what I want.

Finally, the usual output settings are here, with an additional drive that you’ll be careful not to push too far as it can very quickly sound ugly.

On the overheads, on a drum buss with MS treatment or an electric guitar you want to make stand out of the mix, that’s the kind of effects that’ll make you spend more time than you’d thought, keeping you busy playing with the filter – so beware.
Hiss and grain (yes, grain) are brought in, and overall it brings a real identity, provided you need it.

Is it easy to use? Yes and no (that’s for a useful advice, huh?)
Is it efficient? Yes.

- the EQ - filter, as there’s a moment when you have to choose, either you do rock or you knit, and this is no time for knitting.

- the look is a killer, and that’s good news as you’ll have to spend a while on it before getting a really satisfying result

A bit expensive for a basic config, especially if you keep adding Waves to Waves: you’ll end up thinking that you could have bought a Trident channel strip of several Joemeek EQs for the same price, and THAT’s a downer. But hey, that’s progress, they say, what could you do about it?
Did you find this review helpful?yesno
»