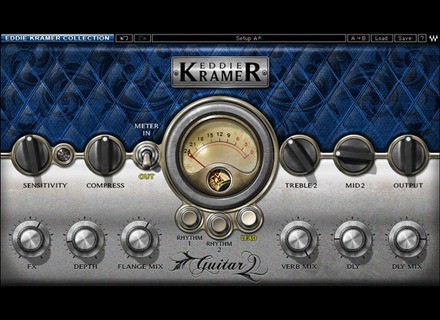 Waves Kramer Guitar Channel
4
Eddie Kramer is one of the more famous engineers out there. He comes from Cape Town and has done everything from Hendrix to Kiss and beyond. Waves has been doing quite a few different plugins like this to promote engineers or vise-versa, so it's no real surprise they made this. This plugin is basically a little effects/master plugin for guitars. It has knobs for sensitivity, compress, treble, mids, output, effects, depth, flange mix, reverb mix, delay and delay mix. There are also three buttons to select between rhythm 1, rhythm 2 and lead.

To use this plugin, you simply enable it on your guitar buss(es) inside of your DAW. It's an extremely easy to use plugin, and you shouldn't need to use a manual. I never read it, personally. I never experienced any issues when it comes to compatibility, either.

Waves is the master when it comes to stuff like compatibility and stability. First, this plugin is truly rock solid. I've never experienced any slow downs, crashes or instability while using this plugin inside of Logic Pro. It never takes up too much processing power, and that's a pretty good thing considering that there could potentially be multiple instances of this plugin being used on different busses. The one problem I do have, however, is that this plugin is a 32 bit plugin. I know it's a touch old, but I'd like to see this rewritten in 64 bit. With 32 bit plugins, you generally have to run some sort of bridge/wrapper application to allow you to use them in a 64 bit environment. I'm hoping they'll update it later on. I've been using the Mercury bundle for about half a year or so, and it's been awesome so far.

This seems to work decent on lower gain stuff. Keep in mind that I'm a death metal guitarist, so that skews my view a bit. My guitars are already super compressed due to the natural gain from the amps. I don't really want to compress them anymore. If I start adding tons of effects, they'll get buried in the mix. This plugin works decently for leads, and seems to do midgain stuff well, but I don't recommend it for high gain. I never tried it on cleans, so I can't comment on that part.
Did you find this review helpful?yesno
»

Waves Kramer Guitar Channel
5
The Waves Ltd. Kramer Guitar Channel is one of the plug-ins found in the Eddie Kramer Collection of plug-ins. If you're looking at this, you probably already know all about Eddie Kramer, but for those who don't, you've certainly heard his work on Jimi Hendrix and Led Zeppelin albums. Each of the plug-ins in this bundle pertain to a particular application, with this one obviously focusing on guitar processing. The plug-in has a similar interface to the others in the bundle, and it's overall pretty easy to use. There are three main modes to choose from - rhythm 1, rhythm 2, and lead. Once you've chosen which mode suits you best, it gives you a pretty good number of parameters to work with, including those for sensitivity, compression, treble and mid EQ, FX level, flange mix, depth, verb mix, delay, delay mix, and overall output level. As you can tell, there's definitely a lot to work with here as this is quite a versatile guitar plug-in. I haven't yet had a need to look at a manual for this plug-in...

The system that I'm running the Waves Ltd. Kramer Guitar Channel on is Pro Tools 9 based, as I was previously running Pro Tools LE 8 with it. I've got a Mac Book Pro computer that has a 2.2 Ghz Intel Core 2 Duo processor and 4 GB of RAM. I'll either run Pro Tools as a standalone piece of software or in tandem with a Digi 002R audio interface if I'm recording or working at home. I've only tried running a few instances of this plug-in at once within a single session, and haven't encountered any performance issues with it as of yet.

Although I usually use individual processing plug-ins for true mixing, the Waves Ltd. Kramer Guitar Channel is the perfect way to get a quick and easy guitar sound in the box. It's really easy to use while at the same time gives you a ton of parameters and control to work with, as it's sort of a Swiss army knife of plug-ins for guitar. In fact, all of the plug-ins in the Kramer bundle work this way, as it's definitely a bundle worth considering adding to any DAW. I've only printed a couple of mixes with this plug-in on it so far, but have used it a lot for getting out quick rough mixes since it's so easy to get a sound with it. I don't know that I'd recommend this bundle over something like the Renaissance Maxx bundle, but if you've already got most of the Waves essential plug-ins, the Guitar Channel and Eddie Kramer bundle are definitely some plug-ins worth trying out a demo for!
Did you find this review helpful?yesno
»

Published on 04/12/16
For 24 hours only, Waves' Eddie Kramer Guitar Channel is available at the special price of $29.