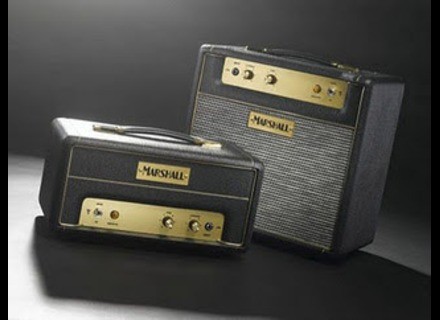 Marshall 1960s JTM1C
3
Marshall has recently released a series of 1 watt amplifiers that correspond to each each of their flagship amps from each era. The JTM 1C is thus the first of the series, modeled after the 60's era JTM amplifiers. The JTM1C is a low wattage combo that can deliver sounds true to the original while offering the flexibility of a very small ambient volume, perfect for home recording and practicing. The amplifier can be switched from 1 watt down to 0.1 watt. The front panel is adorned with a simple two knob control scheme (volume and tone). The aesthetics are very pleasing and it would appear that Marshall has made it their focus to deliver a visually refined product.

The amp sounds very good in its intended application, low volumes. Once you begin to open up the power section on the JTM 1, the amp becomes plenty loud even for being a single watt. If you were to put a mic in front of the 1x12, you could easily gig with this amp, and if you were inclined towards a simple, no frills setup, it might be perfect for you. However, in most applications the JTM 1C will be a large compromise in the live environment, but that's ok because Marshall did not intent for it to be a slayer of stadium audiences. The simple control layout allows you to focus in on your tone and get tracks recorded quickly, removing decisions that may have otherwise distracted you.

I played through the JTM 1C with a Gibson Tweedy SG. Weehbo plexdrive and carbon copy delay in front.

This amp sounds very close to the original JTM tones of the 60's. It has a very percussive quality that is unmistakably classic Marshall. Starting with the gain set low on the plexdrive, I was able to get a variety of very nice sounds that ranged from Hendrix to The Darkness. The amp sounds quite pleasant in the room without verb, but a little delay allowed the amp to speak fluidly with leads. I was very surprised at the amount of versatility the amp provided with the helps of some pedals. On it's own, this JTM should please the crowd it was intended for.

The Marshall JTM 1C is an excellent low watt amp for home recording and practice needs. You could certainly gig with this amp if you mic'd it, and with the help of a decent pedalboard, the amp can be plenty versatile. I could argue that, for what it is, there are plenty of more affordable and better equipped amps out there, but that would be missing the point. Marshall built these for fans, for those who want to give homage to their favorite era Marshall amp, and in that regard they really have made something special.

Hakeem's review (This content has been automatically translated from French)"50 Years of legend in ... 1watt!"

Marshall 1960s JTM1C
5
Marshall gives us a beautiful gift in republishing her greatest hits in paperback ... Neighbors will be happy ... But not as much as we do!
This is a combo "everything" lamp with two ECC83 pre-amp and one ECC82 power.
It is supposed to emulate the JTM45 I say supposed because I&#39;ve never tested JTM45, so I will not make any comparison, but just an opinion of the amp as I understand it.
Only 2 Controls Volume / Tone and returned to 2 feet in legend.
The connection is equally brief, since it has the input and ... and that is all, except of course the food ... Good but there is little doubt that it does not stack ...
HP meanwhile is a Celestion 10 ", and there is the possibility to connect an HP external (8 & 16 Ohms)
Very important point is significant, it is the small switch on the back that allows you to go from 1W to 0.1W (o_O) yes, yes it is possible, and it is seen from the developers!
Last little detail ptite clear light orange look great ... Just like at the time.
The design is very sleek, and very reminiscent of the amps behind Jimi Hendrix is ​​seen on all live ... We love, we do not like .. I love it!

As mentioned above, there are only two controls. You can manage the tone and volume. This is the same principle amps then ... No channel saturated mega distortion and distortion Full saturax + +. You push the volume for a natural crunch caused by the rise of power. With a Les Paul you can still have a nice distortion Rock, ca tomb is its registry.
The advantage of having only two buttons is that the manual is pretty brief ... It teaches us however that the tone knob cuts or increases mediums, so to have a neutral adjustment must be 12h.
As for finding a good sound, to be honest, with a good scratch is "one branch, we play, we love ..." and this is very good!

Insofar as I play mainly Rock in my group, and being a big fan of Hendrix, this reissue I quickly typed in the eye!

The sounds are really beautiful! The clear (and therefore volume position 2) is straight and slamming, and especially fully respects the guitar and microphone used (a Fender &#39;62 Reissue Statocaster) is just superb. Pushing the volume to 5 we start to feel a slight crunch, but it continues to remain straight and clean and always slamming it goes to 10, the curve is very gradual, so we can have many intermaidiaire, but 10 the ca purrs really is hot and what is roots ... Hendrix fan, you know what I mean ...
I also plugged my Gibson Les Paul Classic is still accurate, but with the roundness of the microphones (Seymour Duncan Alnico Pro II & Slash! Hey yes Jimi is not only in the Rock!). The sounds are subtle, although it saturates faster, it remains in the field of well Crunchy on the border of the distal ...
What makes me come to the point of really interesting amp, the fact that it has a channel, and a beautiful sound I have called "right", allows him to any pedal ... And there is heaven ... I tested with a RedFuzz, it is a wonder, a Expandora is ZZ Top ... ProCo Rat is a fatty wants with real nuance according to the rate distortion ... and much much more ... Finally everything goes ... this is a real treat ....
In contrast, the tone knob, I do not have found any other adjustment / nothing / middle ... So I would not say it&#39;s a bad thing ... But rather as a binary option (or trinary ...), but to my ear, this is not the setting of the year ...
Noise level hard not to love ... In any case, I love all my configs gear (guitars / pedals) allows me!

The quality of the finish is really good. I would have liked against by the combo version is available in 12 ", with a Grennback example ...

This is pure plug and play, plug, increases the volume and go!

PAr cons, I do not drive, I Rangemaster crazy one or the Lius ass, the sound is hell, fatty wish! Ideal for playing Led zep, ACDC etc ...

I play mainly 54 and a Gibson YOUR YOUR 60 Special. I can tell you that this amp and cut for his LP. With a strat, it is less obvious, then, I'll just say that I prefer to play my strat in another amp more appropriate.

If I should redo this choice, I admit that I hesitate with Field 57 ... But just a matter of taste, if you are an aficionado of grain Marshall, go for it! The price / quality ratio is pretty good if like me you bought initially at least € 600 (combo version), this is a good report, but when you see it today sells for more 700 €, it is better to think and not crash.