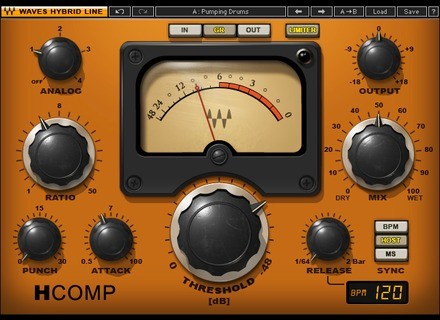 View all offers for Waves H-Comp »

Waves H-Comp
4
The H-Comp compressor is a plug-in by Waves to be used inside a DAW. Installation of all Waves product is pretty easy. With v9, you no longer need an iLok, any USB stick can be used to run the software on multiple computers. Authentication can also occur without a dongle if your computer is connected to the internet.

The H-Comp is part of the 'hybrid' line of plug-ins from Waves. These plug-ins are marketed to have an analog sound with digital functionality. H-comp definitely has some features that aren't typically found on analog compressors. There is a 'mix' knob to blend in an uncompressed signal to achieve the popular parallel compression internally, removing the need to have duplicate tracks to achieve the same processing. The release control can be synced to the tempo of the host DAW. I don't know of any hardware compressor that can do that. This functionality might be useful if you are trying to side-chain a kick drum to compress a synch. This makes sure the pumping is in sync with the tempo of your song.

The H-Comp has most of the typical controls of a compressor - attack, release, threshold, ratio, and gain. There is no control for the knee of your compressor. I am not discerning enough to tell the difference between the different choices on the analog dial. Number '3' sounds like some high frequencies are filtered. The other settings are hard for me to tell a difference between. With other products from Waves, switching on 'analog' really just adds some low level noise to simulate analog hiss.

The punch knob seems like a great idea. A huge reason to compress drums is to get some extra punch. Usually when I have used the H-Comp I haven't like the results of the 'punch' knob, so I usually leave it at zero.

I think the CLA Compressors have a better sound if you want to 'color' your tracks. However, you don't have the options of the 'mix' with the CLA Compressors to get the parallel compression internally. When I am in a hurry, the H-Comp does a decent job at getting the analog sound of a compressor.
Did you find this review helpful?yesno
»

Waves H-Comp
5
The H Comp is a compressor made by Waves Plug-ins. It is a powerful dynamic processor that will take the tubes, transistors and transformers, together they will put out some powerful stuff if you learn to use them properly. The interface of the H Comp is very simple, you have an Analog Dial, Output Dial, Ratio Dial, Mix Dry/Wet Dial , Punch and Attack Dials, the main Threshold Dial and a Release Dial. Everything is on the main screen of the plug in and there are no sub menus or hard to navigate or read texts. The H Comp does offer a demo that you can download to decide if you want to make the purchase. Many people have compared the H Comp the CLA compressors bundle. But they CLA compressors bundle is modeled after classic hardware compressors and if you don’t have a lot of knowledge with those classic compressors you mine as well just go ahead and go with H Comp.

I have installed H Comp on two different machines, one running Windows Vista and one running Windows 7. It has worked great on both and has never gave me any issues. I have used this plug in with Cubase, Ableton and Pro Tools. It has been very stable no matter where I have used it at. I have been using it for almost a year now.

Overall, you really cant go wrong with something from Waves Plug Ins. Every time I use one of their products I am completely happy with it, and best of all they give you a chance to use it before you pay for it so you know if its exactly something you want to spend your money on. I am very happy with my purchased. You will love how easy it is to use this compressor and you will start using it a lot and maybe even as your main compressor. The price is very reasonable for the quality of a plug in that you are getting with H Comp.

Waves H-Comp
4
The H-Comp compressor is a tube and transistor compressor built into one little plugin. It's a very unique idea to try to get the warmth and dynamics of a tube compressor with the precision and predictability of a transistor based compressor. The plugin itself is very simple to use, but you can do quite a bit with it. You have knobs for the ratio, attack, threshold, punch, release, output, mix, analog signal, a button to allow for it to act as a limiter, the ability to side chain and a sync button. Waves has tons of compressors, and this is one of the better ones. However, it can get a bit overwhelming with just how many compressors they have. I still have trouble choosing certain compressors at times with how many they offer in the Mercury bundle. There were no compatibility issues with this, and I can't comment on the manual as I never read it.

Waves has a fairly strong reputation out there for making some of the most stable plugins out there. Most don't take up too much memory when using them, and this is no exception. The biggest issue this plugin has is that it's not 64 bit. While it doesn't really matter for me, it might matter for others. I'm lucky enough that Logic Pro has a built in bridge to allow the application to run 32 bit plugins inside of a 64 bit DAW. I'm not sure if other 64 bit DAWs have that with OS X, though. You'll have to contact the company and make sure. I never experienced any crashes, and I don't really expect to since everything runs so smoothly. Then again, I have a Mac Pro with OS 10.6.x, and these machines are known for their stability.

With so many compressors out there offered by Waves, it's real easy to get compressor overload. This basically combines analog and digital compressors all into one to give a really cool sound to the overall mix. I like using this on the master bus to get some unique tones, but I still gravitate towards other compressors at times. Be sure to check out its limiter and side chain features, too.
Did you find this review helpful?yesno
»

Waves H-Comp
5
The Waves Ltd. H-Comp wasn’t hard to install at all and after getting everything in synch with my iLok I had it up rather quickly.  I didn’t have any compatibility errors and really didn’t have any problems getting it up and running.  The interface of the software is laid out smartly and even though there is kind of a lot going on it won’t take users too long to get used to everything.  The plug-in has a ton of different parameters including knobs for ratio, punch, attack, threshold, release, mix, and output.  The release also has a great feature where you can synch it up to the BPM of the song that you are using this with.  There is also a knob for the amount of ‘analog’ that you want, which is a new thing in Waves’ new line of hybrid plug-ins.  There is also a meter that you can set to either show input, output, or gain reduction and a button to use this strictly as a limiter as well.  A manual wasn’t necessary for me, but for new users might not be a bad idea if you aren’t all that experienced.

I have used the Waves Ltd. H-Comp on a Mac G5 that runs with a Pro Tools HD system.  I’ve never had a problem running a few of them at a single time, but generally will only use one or two at a time as I like to mix and match different compressors.  It really depends on what type of system you are running this on because this will take up a decent amount of processing power, but if you have an adequate machine you shouldn’t have too much trouble with it.  Pro Tools LE users will probably run into more problems than HD ones, as is the case in general with plug-ins.

I only recently started using the Waves Ltd. H-Comp as it is a fairly new plug-in, but already I can see that it is definitely one of the better compression plug-ins that Waves has released.  It sounds great on a variety of instruments, especially vocals and guitars.  However, it offers a ton of control over your sound so it can really be used on anything.  The new line of hybrid plug-ins that Waves has released are pretty impressive and the Waves Ltd. H-Comp is a fine example of what they have to offer.

Published on 06/02/16
Waves continues to offer theme-based "1+1" deals on plugins, with the H-Delay plugin free when you purchase H-Comp today only.

View all 2 videos of Waves H-Comp »