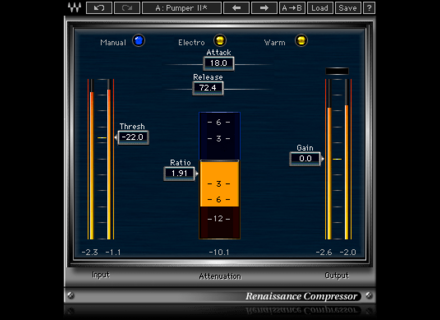 Renaissance Compressor, Software compressor from Waves in the Renaissance series.

Waves Renaissance Compressor
4
This plug-in has been one of my favorites for a long time. It can be very transparent and is great for when you need to compress, but don't want any sonic influence from the compressor. It's easy to use and has some interesting functions such as the Opto/Electro options for more vintage/modern sounds when you do want your compressor to add a bit of warmth or clarity to your track.

This plug-in is very stable and also decent when it comes to CPU usage. It's suitable for every track but I especially like it on the Master bus and sub-groups like overheads and background vocals. It's very effective for more subtle compression jobs. Also helps for getting a fat bass. Heck it's simply good on everything.

If you're newer to using a compressor with some of these features (such as the Opto/Electro settings I mentioned) there are some great presets that you can A/B to get a feel for what the difference in sound and then make a decision in terms of which would be best for your current project. The other presets are great starting points as well if you need help or even new ideas.

I think once again that if you understand compression, this plug-in is very easy to use and if you don't Waves seems to have decent service although I haven't needed it too often. I've also never looked at the manual so I can't comment on its helpfulness.

I think this plug-in is decently-priced, seeing as it can really handle any instrument or situation. If you can only afford to grab one good compressor for your set-up, I'd probably choose this one.

- How long have you been using the product?
2 months
- Which features do you like the most / the least?
It sounds great, it's hyper-neat and easy to use I use it mainly on instruments like guitars, pianos, toms, snares. Also on certain backing or rap vocals.
- Did you try any other models before buying it?
Yes
- How would you rate its value for money?
It's expensive but it's okay
- Based on your experience, would you choose this product again?
Yes
Did you find this review helpful?yesno
»

Waves Renaissance Compressor
4
Compression has been probably the number one effect ever since The Beatles started using it heavily. There is always a battle between trying to find a compressor that sounds organic and vintage, yet is accurate and fast enough for some of the more dense music out there. To be honest, there are all kinds of compressors out there, and a lot of them are great for specific things. This is a pretty good, overall compressor that can really aid a mix and help everything stand out a bit better. It's a simpler compressor than some of today's digital compressors in that it only has five sliders -- threshold, ratio, gain, release and attack. To use this, simply enable it on whatever buss you want compression on. I never read the manual, but you should be able to figure this out without reading anything.

Waves rules for audio plugins. For one, they're always rock solid and super stable. I've never had a single crash while using any Waves plugin, and the same goes for this. The plugin itself doesn't take up much RAM or processing power, which is a big plus for those who tend to have tons of plugins going on inside of their DAWs. The plugin is also cross platform compatible, so just about anybody can use this without any issues at all. There is one issue that I did experience, and that has to do with the actual coding of the plugin and today's recent OSes/DAWs. The plugin is a 32 bit plugin. However, my DAW and OS are 64 bit OSes. For Logic Pro, my go-to DAW, to utilize this, it needs to run a special bridge application. However, I'm not a huge fan of the way Logic implements that feature. I'm hoping that Waves updates these to 64 bit in the future. I've been using the Waves Mercury bundle for the past half a year or so, and it's been absolutely killer.

I've used this successfully on mixes when I didn't feel like messing with too many options. It delivers a solid sound, and it never let me down when I used it in a mix. However, my go-to compressor for all around mixing is still the standard Logic compressor. I'm just very used to how it works, and I'm able to work quickly with it vs. other compressors out there.

Waves Renaissance Compressor
4
Did you have any problems during the installation?
Yes (you need an iLok key and account)

How complicated is the overall configuration?
It's easy

Did you have any incompatibility problems?
No

Is the user's manual clear and comprehensive?
Yes

Does the software work correctly with your setup?
Yes

Is the hardware+software configuration stable?
Yes

How long have you been using the product?
6 months

Did you try any other models before buying this one?
Yes

Which feature do you like the most / the least?
I love its simplicity, the fact that you can choose the compressor mode (electronic-opto) and the warmth it provides with the warm function. I use it especially on certain basses and to bind together elements of a drum kit (bass drum, snare, claps...). And you can also place it on the master track.

How would you rate its value for money?
It's expensive, but it's worth it. It's sold on its own and in a bundle. It's part of the Renaissance series, which isn't the best but it's very good and not too resources-intensive.

Based on your experience, would you buy this product again?
Yes
Did you find this review helpful?yesno
»
Read the 6 user reviews on the Waves Renaissance Compressor »

Published on 04/20/16
Today only, Waves offers its Renaissance Channel plugin at $29 with the additional Renaissance Compressor for free.