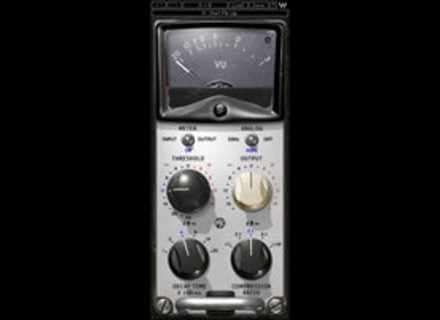 Waves Eddie Kramer PIE Compressor
5
More plugins from the famous engineer Eddie Kramer. This time, Waves successfully cloned the vintage Pye compressor that was used at London's Olympic Studios. This was used throughout the classic rock world, and it's one of the best compressors out there. Waves took that famous compressor and made it into a software audio plugin that anybody can easily use. The plugin itself is fairly easy to use. The range of the knobs is good, there are some toggle switches you can choose from, and it sounds great! The main knobs are the threshold, compression, output and decay time knobs. These will control most of the features of this plugin. However, there are some small mini toggles that allow you to adjust different settings, including some of that famous hum.

Waves plugins are pretty well known for being the industry standard plugins out there, and for good reason. First of all, the plugins are cross platform. That means that both PC and Mac guys can use them. Given that I'm a Mac guy, that's a huge plus for me. The plugins themselves are very stable. I've never experienced a crash directly related to inserting a Waves plugin into any audio or MIDI bus in Logic. I've never read the manual, so I can't really comment on that. However, most of these plugins are fairly intuitive when it comes to their usage. While the names may be a touch convoluted if you don't know what they're modeling, you can get a good idea as to what they do if you just mess around. It doesn't take up much memory when in use, even with the 32 bit bridge application in Logic, and I've been using these for quite awhile now.

This isn't exactly the cleanest and most transparent compressor, but it's not meant to be. This is meant to replicate that real old school compressor that was used in many classic rock recordings of the time. It has some great usage for giving those lower gain tracks some real character, but using it with higher gain isn't exactly my thing. Try it on the drums to give it a real unique sound.

Waves Eddie Kramer PIE Compressor
5
The Waves Ltd. Pie Compressor is a relatively new plug-in that was partially developed with renown recording engineer Eddie Kramer. It is modeled after a compressor used in during the 1960's in London at Olympic Studios where Kramer recorded the likes of Jimi Hendrix and many other notable artists. While I didn't expect the Pie Compressor to give me the same tone of the original, I was curious to hear what they had come up with. After installing it, which only took a few minutes after following the step by step instructions, I was able to have the plug-in up and running. The interface of the plug-in makes it easy to use, and it also looks real cool as they have modeled it to look like a vintage piece of gear. As far as parameters go, it has knobs for threshold, output, decay time, and compression ratio, and switches for choosing what you view of the VU meter (it's between input, output, and gain reduction), and a switch for what is essentially a high pass filter to get rid of noise if you have some at either 50 or 60 Hz. Overall, everything about using the Pie Compressor is pretty straight forward. I don't think a manual is necessary for use with the plug-in.

I'm currently running the Waves Ltd. Pie Compressor on an Apple Mac Book Pro that has a 2.2 Ghz Intel Core 2 Duo processor and 4 GB of RAM. I'm running it with Pro Tools LE 7.4 that runs with a Digi 002R audio interface. I can't say that I've had any trouble running the plug-in, as it doesn't seem to take up much processing power. As long as you have an adequate system where you're presently running plug-ins, I think you'll be okay with this one, but as always it really just depends on what kind of system you have to run it with.

The Waves Ltd. Pie Compressor has a generally thick sound, and is great for a variety of applications. I think it can be useful in a lot of different situations, especially when a sound needs a little bit more beef. I've used it on electric guitars, vocals, and a Rhodes electric piano, all of which in situations where I was aiming to get a bit more thickness. The price of the native version of the Waves Ltd. Pie Compressor is about half that of the TDM version, which is pretty average, but depending on what system you are running, it may make a difference on if it is worth it for you. This is definitely a much better than average compressor at a decent price for those looking for a grittier and beefier compressor plug-in.

Waves' Weekend Deals for this Saturday