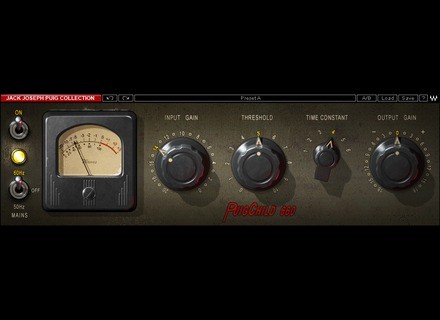 View all offers for Waves PuigChild 660 »

Candid comments from the renowned producer/engineer about gear, mixing and more

Published on 11/18/14
One of the best known and most successful producer/engineers in the business, Grammy-winner Jack Joseph Puig has worked with heavyweights like U2, Green Day, Stone Temple Pilots, John Mayer, Fergie, …

Waves PuigChild 660
4
Waves has a package of old school plugins they made after very famous compressors out there. This one is a model of the famous Fairchild 660 compressor that was so famously used throughout recording studios during the whole vinyl era. These compressors were very rich and harmonically complex, and Waves set out to create something that could mimic that famous sound. Although I've never tried the original hardware version, they did a pretty good job, I'd say. It definitely has that vintage sound going on in spades. On the other hand, its uses are a bit limited as well. You have an input, threshold, time and output knob. These four knobs are supposed to control the entire compressor, and compared to today's compressors out there, it's fairly limiting.

Waves plugins are well known throughout the audio recording land as some of the best plugins out there, and this is no exception. For one, these plugins are all cross platform. That means that they work on both Mac and PC. For Mac users such as myself, that's a huge plus. The plugin itself only runs in 32 bit mode, but thanks to Logic's own little wrapper/bridge, it can run in 32 without harming or degrading the 64 bit environment. I never read the manual, so I can't comment on that. These plugins are rock solid, though. I've never had a crash when using them. I've had the Mercury bundle for a few months now, and it's just awesome.

I prefer some of the other compressors in the Waves lineup, but this one is pretty good. It has a somewhat limited usage, and the compressor itself is limited as to what it can do, but for those classic rock riffs, it can really add some complexity to it. Once you start getting things pumping, all kinds of neat harmonics and nuances start to occur. Check it out if you get the chance.
Did you find this review helpful?yesno
»

Waves PuigChild 660
4
The Waves Ltd. PuigChild 660 is a compression plug-in modeled after the classic Fairchild 660. It’s a part of the Jack Joseph Puig Analog Legends bundle, which consists of other plug-ins like this one that model themselves after classic analog equipment. PuigChild 660 is one of the best 660 plug-ins that I’ve used, as there are a few of them, but as is the case with all of these types of plug-ins, don’t expect these to give you a sound anything close to their hardware counterparts. The PuigChild 660 has an interface that shares just about the same parameters as the real 660 and Waves has done a great job of replicating the original look. These parameters include input gain, threshold, and time constant, which is another name for release. It also has an output gain knob, which I don’t believe is found on the original 660. It should be easy enough to use where a manual or outside assistance isn’t necessary.

I’m running the Waves Ltd. PuigChild 660 plug-in on my home system along with the full compliment of Waves plug-ins and the rest in the JJP Analog Legends bundle. My system is based with Pro Tools 9 and a Digi 002R audio interface along with a Mac Book Pro computer. The computer has 4 GB of RAM and a 2.2 Ghz Intel Core 2 Duo processor, while I’m monitoring with a pair of Adam A7’s. This will take up more processing power than the Bomb Factory version, but still shouldn’t give users too many problems.

The Waves Ltd. PuigChild 660 is a pretty good compression plug-in when setting aside the hype it’s built up for itself being a replication of the classic Fairchild 660. It’s not my favorite compressor in the world, but is super easy to use and has a pretty good sound – especially for drums and guitars. I like it better than the Bomb Factory 660 and the Nomad Factory, although both are pretty good as well. They don’t sound close to the same to me however, as this one is a bit cleaner than the others, which isn’t really staying true to the original 660. Don’t expect this to be like a 660, but it’s a cool little compressor to have in the arsenal.