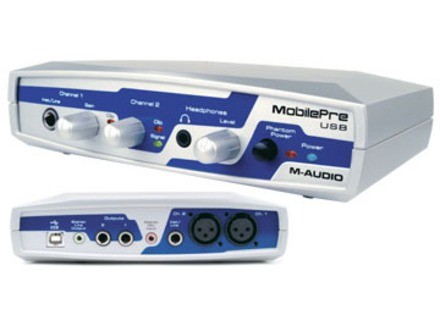 M-Audio Mobilepre Usb
3
When I bought the M-Audio Mobilepre USB I got it because I was looking for a small audio interface that I could easily bring around where ever I needed to go. I usually it only to get down ideas, as this really isn't a suitable interface for serious recording. I will outline why in the later sections. I was running this with a HP Pavilion lap top that had a 3.0 Ghz processor and 2 GB of RAM. I was running it with Cubase SX 2.0 and it worked pretty well with both of these things. I used this primarily to record scratch guitar and vocal ideas.

I was able to use this without any problems for the most part and I had no compatibility issues with my set up. The configuration is very simple as it has 2 XLR mic pres, a few different outputs, a headphone jack and a DI jack. It also has a USB port which send the signal to the computer. The manual seemed to be pretty clear, but I didn't need to use it all that much.

The drivers are stable as I never had a problem with them when using it. I used it only with Steinberg Cubase SX 2.0 and had only a minimal amount of latency. Most of the time I had no latency but when I did it was still playable. You can record two tracks simultaneously as it has 2 mic preamps. The real downfall of this interface is how poor the preamps are. To me they don't sound full enough and don't represent a fully accurate portrayal of the sound I am recording. That being said, for this price I wouldn't expect to get anything more than this. For this reason I bought it only to bring it around and to have the ability to record ideas on the go.

I had the M-Audio MobliePre USB for about a year and half before I sold it. It did the job I got it for, but it is poorly built and I had problems with a few of the jacks breaking. The mic preamps just don't sound all that usable to me and while the model is cheap, you get what you pay for. I sold it because I can now record directly into my new computer without a small interface like this out. While this is good for what it is, you can probably find another model around the same price that is made at a higher quality.
Did you find this review helpful?yesno
»

M-Audio Mobilepre Usb
5
This is a review of the M-Audio MobilePre USB Audio Interface. I had bought this piece of equipment right when I started producing. I was ignorant to the game, and I was not totally sure on exactly what I wanted. I walked into the music store and explained my situation to the clerk, and he pointed me to this interface. I was shocked at the price, but after a little research, I was convinced that this was as low as the price can go for a USB interface. I used this interface as a primary soundcard, preamp, and audio interface for all my monitoring and recording needs. I had a relatively new computer and it was really easy to install. I use is for a microphone. I needed to get the mic signal from Point A, the mic, to Point B, my computer.

When I installed it, it was automatically detected. I had to download some drivers, but once I saw the Windows XP bubble pop up that said &quot;Found New Hardware: MobilePre,&quot; I was pleased but also suspicious because it was never that easy. It was. There were almost no compatibility issues. I had to learn some things with regards to setting up my default Audio Input/Output settings in Windows and in Reaper, but this was a problem that I soon grew out of. The general configuration setup couldn't have been easier. The manual was easy to use, and it outlined everything that could be done. I was happy with it.

When I installed it, I realized that the drivers were almost always working properly. I could unplug it, and hear the little jingle through my computer's soundcard that there was hardware removed. If I plugged headphones into the MobilePre when it was unplugged, and plugged the MobilePre back in, I would hear the jingle from the MobilePre. Couldn't be much simpler. However, there were sometimes issues when the sound would get very static-y, and muddy, and everything was lower in pitch. A simple restart always fixed it. Latency was low in Reaper as well as Audacity. The headphones were nice because I could monitor the tracks. Because it's a USB device, you can only record two tracks at a time. For somebody who really only records vocals, this is not an issue.

Some nice features that I would like to tell you guys of are the sort of idiot lights they have on it. If it's clipping your sound, it has a light for you. It will let you know exactly when and if it's clipping in real time via a little light next to the gain switch. Also, there's a signal light next to the clipping light that'll tell you if it's getting sound from the device plugged in. That way, you will know exactly where the base of the problem is, instead of believing that the instrument is working fine and looking at your PC. This is your middleman, and you can get to the root of the problem. Also, there is a dedicated 1/8&quot; headphone jack as well as a master 1/8&quot; jack so you don't have to mess with pesky 1/4&quot; adapters. Also, the headphone jack has a dedicated knob for volume. For people who use budget microphones for podcasting, it also has a 1/8&quot; stereo mic jack for your microphone if your soundcard can't swing it.

I have been using it for various tasks for the last year and a half. I enjoyed the usability of it as well as how user-friendly it was with the clipping lights and the signal lights. It's a very simple interface, perfect for somebody who doesn't need all the fancy stuff that a mixer has. Like I needed to, you get your signal from Point A to Point B. The cons, however, were petty. The headphone jack came a little loose so I have to angle the jack on my headphones to get full stereo sound. Also, the blue light burned out on the interface, but it's really a non-issue. It's a tough little piece of hardware. It's great for those starting out, and at the price, it's pretty easy to get. Cop it if you need something simple and easy to use, and if you're not recording a Symphony Orchestra.
Did you find this review helpful?yesno
»

Mc decisif's review (This content has been automatically translated from French)

M-Audio Mobilepre Usb
5
I have a pc team of like a sound card chipset, not wanting to m 'venture into the bios I have the opt for it.
I have long hsit between audiophile usb and it rflxion but after his report quality price Devana that of the audiophile usb.
quiped a prampli, this card is perfect (and my taste for the price ...) I use it with a Expelec (for the effects of scrambled a little story

) and a sm58 the c1 from a friend (with rglages of c1 that is a perfect sound that I 'get. moreover I' have a command)
treatment is 16-bit unfortunate.

IT IS that branch the card into the USB port and run the driver could not be easier.
manual review.
small problem with the chipset's rsolu the first week.

Driver correct.
choice latency.
j using a 10aine track and share software problems (acid, cubase! nothing to do with the sound card) I 've never had anything.

I use it for about one month and a half and I 'm satisfied with trs.
I am in agreement with prampli Intgr.
I had before the Sound Blaster Extigy your exact and can be heard (haha

)
trs qualitprix good value.
I'll opt for ending for something more "pro" ().
Did you find this review helpful?yesno
»

virgule noeuf's review (This content has been automatically translated from French)

M-Audio Mobilepre Usb
5
Simple, practical, effective and no more CHRE.
and all this to record sound with my laptop and my microphone, I my everything in my backpack and voila I have my home studio on lee back.

The instalation n'apas t very easy, I'm all over the net to find a plug that works.

I use it for two years what I like most is its weight and its simplicity of use, you plug in the USB and voila it works.
I ssay before the Mbox but I dcu t and in addition it is more CHRE bcp.
If I had the choice again I would do it again right away.
this is the first time I am also telling of a computer purchase music.
Did you find this review helpful?yesno
»
Read the 11 user reviews on the M-Audio Mobilepre Usb »

View all 11 discussions on M-Audio Mobilepre Usb »
Cookies help us improve performance, enhance user experience and deliver our services. By using our services, you agree to our use of cookies. Find out more.