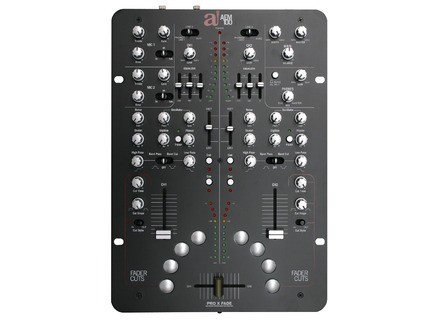 View other reviews for this product:
I have bought without being able to test it before, attracted by the carractéristiques like the pro x fader, the fader cuts and effects, I have taken the plunge, hoping to have my € 600

After one month of use, here are my impressions and reviews about this mixer that brings a bit of fresh air mixers on the market with its share of innovations

I will try to avoid repetition with the opinion of Philmk8

First table equipped with the famous series --- --- PRO X FADE to electricbreaks,
Once the stops set correctly, THAT IS TOTAL HAPPINESS! supersoft
hyper precise cut, net & clean, a real treat for the crab !!!!!!!

While the buttons faders cuts are very good, but pity that by putting the cross fader to off the sound of the two channels is 100%, not 0% (so we could control the aurra 2 channels with fader cuts in " in "& not the one in in the other as out (have to get out of sync is not always clear (from scratch while cutting the sound of the instrument with the cuts in" out ")

ERATUM : Mr Elliot Marx (craéteur audioinnovate and admin of the forum) m &#39;learned that you can put the fader cuts of 2 channels in the "in" putting off of the crossfader and linefaders 0%

Apart from this detail, that is really screwed up (less than 2 milliseconds of response I think) after that is a matter of habit, but when we control for the scratch it a lot easier combos (combos technique )

with the effects: low pass filters high pass & are great (to remove or add the frequency from the top (high) or down (serious)

DIGITIZER is really the bizard, I do not see how we can do something good with open has not even 10% it changes the sound, ok that is funny, but most can not recognize at all the music played (ditto on faz to scratch, too fast and distorted beyond recognition ...)

Stutter on the big disappointment because that is exactly the function I dreamed to be able to cut the sound while staying focused on my scratch myself without having to graft an arm 3 ... but it is not clear at all ... not very clean shall we say ...
only useful for the scratch but really too bad that the break is not clear on a regular basis without making a "click" sound because dsur to cut a rhythm (drum snare ... silence ... ... it aurra been magical if it had been developed)

However, it is Tripp and offers lots of possibilities and combinations when it is applied to the sound generator or FAZ to scratch

too little space between the pots by the way, ok y &#39;has a package must be placed on a surface rather small but turn the pitch and the gain of the oscilator same time it does not ...
I still I have the hands of pianists if I hassle with my fingers for that is that it has been for those that have all of boudinnés ??

The master password for my 2 older mixers before arriving at the receiver to fine tune the EQ. I will test well with monitors even what happens ... but the general level parrait me just fine (although I&#39;m not an expert PA system, and haven &#39;t yet afford to have speakers worthy of the name)

surprisingly enough not KILL TOTAL EQ on! 0, we still hear frequencies (for my part I can overcome thanks to the EQ of my Reloop Scratch 2 connected in series (which also fade them completely cut the signal )

To register for cons, I mix with MixVibes PRO 6 and n &#39;with that sound card (pci) 4entrées / 4 output j&#39; record through my sound card built-in, I have one so its not that good with scratch too high in the treble (but nothing to do with the AEM100, we will have that I look at the issue in tampering in the settings of my sound cards)

happy with the purchase on all but disappointed in some respects, the use being principaleent oriented scratch & turntabilsm you should be fine
but very bad for the Stutter, digitize, and above all the settings upfaders faders and cuts (which can not control that only one side to the same function (the cross to be 0 for a canal, a fader cuts must be set to "in" the other on "out")

but that is indénniable this mix offers many posibilities previously unexplored ...

I hope therefore that the number of critical n &#39;effraira too, this mix is the first branded product audioinnovate (which leave the AEM100i without cuts and with fader settings linefader)

I assure you that IT IS WICKEED . .

PS: Have a look FORUM, I &#39;ve created (among others) a topic on the improvements to be made ​​into the mixer ULTIMATE ...
See the source
Did you find this review helpful?yesno
Cookies help us improve performance, enhance user experience and deliver our services. By using our services, you agree to our use of cookies. Find out more.