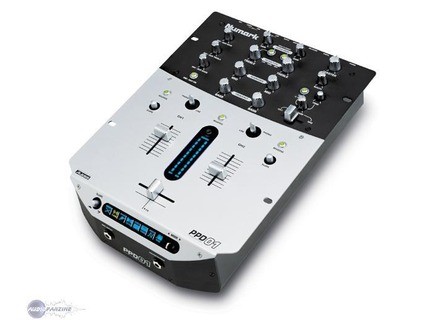 View other reviews for this product:
2-way
Ideal to use with two turntables.

This is a table trs easy to use functions require time to be well maitiss mix.

The sound is exellent, the qualiseur is a marvel, a veritable massacre, the sound that it is absolutely not mtalique, the stamps are just and prcis, the cash lctronique well the carts and level differences, the feel of knobs is super enjoyable, when you get in the way "to hold preset FILTER MODE", you enter another world, to push the filters beyond the limits, a veritable massacre, never seen on other tables, when mixing techno or electro, it&#39;s dlire, intert you have speakers who cash and well that does not saturate, especially regarding the low, all coupled to the multi purpose is to Enfert!
I also admire every day regarding the quality of the filters, a wonder!

I use this table for ending for two years, I bought used 350 Euros (almost 50% of its new value, compared to the price of the table when she left the era) not a scratch, in a state of looking new + +. When I bought the crossfader silent sucks (there was a loose connection at an end and a consquant repisse sound of the plate once that is teacher, I must admit!) in the dmontant, I glimpse the hooks that hold the guide rails taient lightly twisted (she had apparently belonged , not long ago, a guy who scratchait with a nag), I remarqu that the cross had never dmont t!, I cleaned the tracks with a cotton swab and put a good shot of spray contact, I remont all this, and since it is nickel (I once had this little problem ... in two years ... but trs TRSL ger), like I Redmont cross, cleaned etc ... put the bomb contact, and since we go again as forty, since I no longer of problems.
I do not scratch with the cross is super fragile and requires maintenance (much like the engine of a car, not the drain every 10 000, but put the bomb rgulirement contact every 6 months or more, depending on use), if you do it regularly, you will not have any problem, is that it is fragile little girl! But we understand the fragility which cross the tracks used for gre several multi-effect integr of its complexity or who actually made his heel Hachile ... The engineers have to do this shit, but I forgive them, it have at least one bone CRER single system that does not exist on any other table had to be done! despite its fragility even when I shoot them my hat.
Otherwise, I find that the cross is not made for scratching, I found it "somewhat heavy", the crab-scratch is tedious to do, and the cut is not a terrible redoutabilit, c &#39; is the least we can say (not very very net net, if you know what I mean ...), why we prfairera cross a Gemini UMX3 more basic (in the low end), a Vestax (in the high end) etc. ... much smoother and faster with a more straightforward and clear cut.
The faders are good quality touch and stroke of the faders + qu&#39;agrable we feel even when it&#39;s good stuff and not sham.
This is a relatively complte table, with two rglages on two output levels (eg back and the sound system) practice to grate the two without touching the amp being mix, the headphone output is relatively powerful is that is enjoyable when you hear or mix too returns or the sound in the room, and the sound is good quality and more with an adjuster bass / treble, the return this discretion with a crossfader, which is my taste more convenient and faster than ever strum keys (like the Pioneer DJM500, not the name!).
The VU meters lack prcisions, everything is blue from top to bottom! It&#39;s pretty, but how do you know if is saturated or not? I remarqu that sound n&#39;tait not saturated to half and between 3 1/4 gain, APRS must rely on her ear + Another ... default, the quality of "imitation chrome paint" who goes around dconfiture the cross, it&#39;s been really ugly, too bad she is so beautiful between my mk2 gray.
It is now two years I possde, and I&#39;m never bored in my mixes., Multi effect adds a + is a table for well o master the muti-purpose ncssite time, it is not in six months that can go around, especially in the techno possibilities are nice, (not the same as a Kaos pad for example) as long as the we have a little imagination and it is known manage the trick ("autocut rate" and "filtered spleen" eg. stall at the same BPM piece etc ...).
Or the price I pay I do not regret my choice, it is still a good table trs, despite the fragility and unreliability of the cot crossfader.
Today I do not regret my purchase, but if I had to put almost 600 Euros I would regrett more "default" of cross-fader ... but for a little over 300 Euros gonna I am happy.
T seen what it&#39;s going withdrawn from the market may be becoming a collector&#39;s table who knows!
Too bad they laisss drop the original concept of this table without being able to delete the default ... raliser too expensive ...?, Numark he lost too much money on this product ...? raliser not? ... too bad, the good ide silent.
In short, it&#39;s a good table for techno, electro, drum&#39;n&#39;bass, filters are good and powerful, the crossfader dconseiller fans of hip hop and other bourrineurs cross!, It must be delicately manipulated and maintained contacts with a bomb graissante regularly, if you follow my advice you will not have Trouble with.
If you find it cheap, this table remains an affair.
See the source
Did you find this review helpful?yesno
Cookies help us improve performance, enhance user experience and deliver our services. By using our services, you agree to our use of cookies. Find out more.