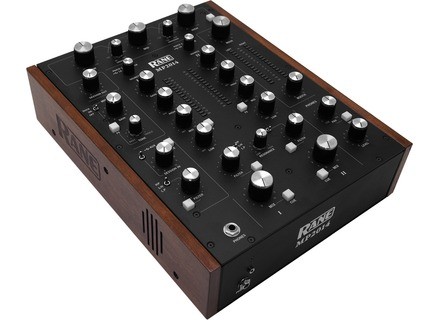 MP2014, 2-Channel Mixer from Rane in the Scratch Live series.

Value For Money : Correct Audience: Advanced Users
I chose the MP2014 as I was after a high quality mixer able to become my setup’s primary mixer, the one I use to mix most often and on which I can plug my computer music system as well as other, more classic mixers.

I wanted a main mixer which would illustrate my favourite styles, that is house and electronic music.

This mixer is indeed not a standard mixer; it takes you back to the 80s with its 100% knob-based layout. The knobs btw are exceptionally precise and allow for a smooth mixing process.

The filters with a resonance setting are a real pleasure. I had never imagined how important the filter’s resonance is before trying this mixer. It incites you to have a sound come in through the filter starting with a low resonance setting, then setting it slowly upper and upper while lowering the filtering. A real professional, cooled-down way to mix which is most often used in electronic music/house/disco, but can also be applied to other styles such as hip-hop.

The Isolator is also important, and its quality is excellent. Using its two secondary knobs, you can set the frequency range which will be impacted by the three main knobs. I personally use the Isolator to change the warmth of my sound during the same evening, but others use it like an effect, doing gating with the on/off switch – I personally don’t like it too much, or maybe I’m doing it wrong?

It’s a 2-track mixer but it features a third session/aux track which EQ is limited to a single bass/treble knob, though it also features a filter. Quite practical as an input for another mixer of backup deck.

It also features two USB ports for switchovers from one DJ to another, and its sound interface also works with iOS on an iPhone/iPod/iPad with no hub necessary - it is indeed a class compliant device, allowing it to work on a Mac without installing a driver.

A loop allows to insert effects on the voice is also there, and the mixer features master, booth and record outputs as well as a mic in with ducking.

The finish is awesome, even better than any high-end mixer by Pioneer or A&H and the wood sides highlight the paradox of “modernity VS back to the 80s” (you can also take them off if you prefer).

I long hesitated with the 2015, but in the end the 2014 perfectly suits me. I usually use the two main tracks to mix and the section track for a drum machine or sampler. Plus, this model is way easier to transport and is only 11 inches wide – wooden sides included.

The US production of the MP2014 and 2015 stopped in mid-2016 and only took back in Asia in mid-2017 – whether the quality is the same remains to be seen. Hence, US models are now somehow collector items.

As for the digital part, the “session” track offers an SPDIF in/out, though unlike the MP2015 the main tracks’ in/outs remain analog, even when you switch to USB mode – in that case a (high-quality, by the way) AD/DA conversion is operated.

The resulting sound is just unique, this mixer is the most neutral-sounding that I’ve ever heard, so much that when I used my other mixer afterward I first thought it had a sound problem – actually no, it was all about the difference between a real, professional mixer and a semi-pro model. The default sound is flat, somehow like studio monitors/headphones, and you can customize it using the integrated Isolator.

It also works in DVS mode, with Traktor and Rekordbox for instance, but not (or not yet?) with Serato, though considering my music style (house and so on), Traktor is way more useful – unless of course Serato would change and broaden its functionalities as Serato leans toward scratch and traditional mixing. On a side note, the MP2015 is Serato-certified through the Club Kit, so it’s likely the MP2014 will end up being too.

In the end, if you’re into house, electronic music, disco, nu-disco and you can afford it, go for the MP2014, it’s well enough to have fun. If you’re not into these styles, then it’s likely you’ll miss the crossfader but maybe it would help redefine your mixing style? Whatever scenario you adopt, it’s a purchase you won’t regret and the resale value is very good – especially for the US-made units, you might sell it for more than its purchase value.