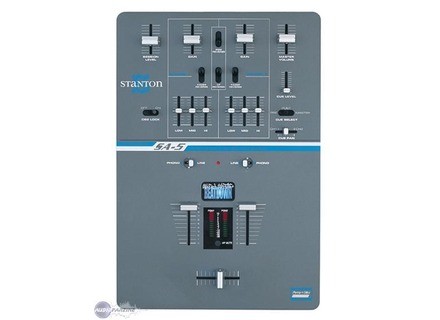 View other reviews for this product:
- 2 phono / 2 lines
- Between a mic / session
- 1 master
- A record
no effect ... no possibility of loops.
triple equal. trs effective. as in the fader 07.
position of the faders + triple inversion
Systm of triple prcoute

everything is very well explained below.

I would put 7 1 / 2 because there could have been a effects loop, a separate entrance for the mic session and a correction for the mic.

Using very simple and particulire. ca is a mixer
All the buttons are faders, some will like, others not ...
there is something to say. SUPR the switch is light, and if we don 't use it for the function block, sometimes you move the switch unintentionally.

I put 9 because I'm sure this is not perfect and that little mole of b-switch ...

I put 8 because I think the sound is good, but I am sure there are better.
But compared to its price, the sound is really good.

I have been 7 months and still no balls. Apart from the shield around the cross is all claw. but it is possible that I may not be quite gentle with ...

for me its 3 + are:
- The ergonomics (including look)
- Sound
- Faders
3 - are:
- A single entry for mic session
- The little "problem" of switches
- Not very rsistante plate scratch.

before, I had the ecler hak310, I 've not changed because I did not like the ecler, but because she had a problem at the power supply while jlai refourguer at Cash Converters. looool.
but otherwise, I'd rather one than the other, for different reasons.

report qualitprix very correct compared to what yad other on the market.

I think I would do this choice because I like this table. but I think also that I would take another because I like change, and I'm sure other tables are valid, but for other reasons.

if you want to know more, go ahead.

(I have bought a Belgian site 370. Ca though INTERESTED, www.prosl.com)

I would put 8 as the final score because the price that is already in the pure ball, but I will have apprci an effects loop (send-return) and one for the microphone and entrespare for the session.
at that time, I think that I 'would never change table ...
See the source
Did you find this review helpful?yesno
Cookies help us improve performance, enhance user experience and deliver our services. By using our services, you agree to our use of cookies. Find out more.