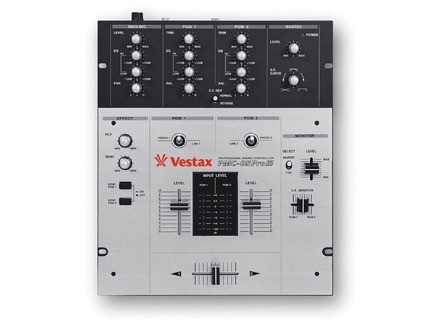 View other reviews for this product:
This table Vestax PMC 05 PRO 3 DX is one of the latest version of the 05 before the new generation of mixing table. Clean all the old 05 except small checkerboard top level knobs that gives it a classic style motorsport look. Note there 's no Serato Built like the RANE.

For the rest of you still have the two inputs Line / phono RCA, dual RCA outputs, 2 microphone inputs, tuning curve of the cross, so far nothing special. Except that added two inputs and outputs called PGM1 and 2 for effects ... moderately useful when you know that it is rather a pure table scratcher. By against me which had a PRO 2 05 a slight effort was made on the sound that has never been the strong point of Vestax, I have a Numark DXM Pro is more efficient. I ultilisé at the time or the Serato was beginning to cartoning and since it has become referred to DMC, Vestax out rectified the sound level.

Not need the manual, it's a bit like all the tables like this easy to connect and easy to use. Very solid and good for travel or other parties scratching.

At the cross, which is my most important sense for the third generation it holds up without being high performance. After several months of use out of breath and he loses fluidity but without hardening as was the case for older versions. It is quite accurate, more accurate than my Numark DXM PRO. on the other hand is far from RANE and other tables with their new ultra handy cross ... normal is not the same budget either. on the other hand I advise you and it applies to all Vestax to transfer the cross and put a Pro X Fade and then levels scratch the table becomes a Weapon of Mass Destruction Battle Scratch! Anyway thanks to that we advance faster in learning new techniques especially (Autobahn, Boomerang ...)

The level for Mix importantly, an effort has been made on the sound quality but it's still a little too focused on acute even if transcribed pretty good bass, when a mixer technics we had that means Direct the sound lacks a bit of clarity and punch in the bass. I can not say more because I always consider the need for a table and a scratch to the mix, it is for the scratch. In any case in this budget and for those who start it will is not death alone can mix Hip Hop RNB etc without problem, I chippote a little when compared to a reference that is in my technics, but c It is a good product is not on the Gemini or other daubes.Pas breath and yet I have been a moment on this point is better than the older versions.

I use it for more than six years, she has not moved an inch. I would say that for the last Vestax PRO 05 just before the new generations, this is the most effective much more than 1 or 2 PRO. For Mix it's still okay but nothing more, for scratching Vestax is the customized ball with the Pro X Fade you turn it into a racing and more with little checkered above sounds a bit style competition. I assign a 8/10, it's still a good product especially for Rookie for the more experienced or it's for a table routine scratch with Pro X Fade, otherwise I think you will opt for more modern.
See the source
Did you find this review helpful?yesno
Cookies help us improve performance, enhance user experience and deliver our services. By using our services, you agree to our use of cookies. Find out more.