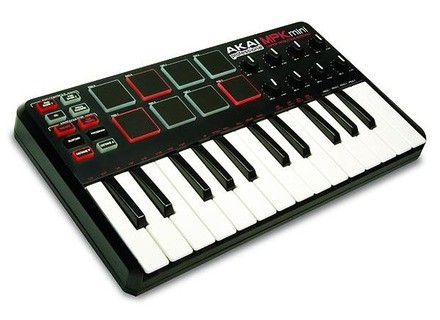 View other reviews for this product:
For over 8 years I made music with only my computer mouse and keyboard, but as time went by and my skill developed I felt it was time to buy a MIDI keyboard just to add a new dimension to my creation process. I decided to get a small keyboard to start with since I'm not an expert player. After a bit of searching I came across the AKAI MPK Mini which I purchased.

The unit is a USB MIDI controller which has 25 standard piano keys, 8 drum pads and 8 knobs for assigning to various controls. It has a dedicated buttons for changing the octave up or down, a built-in arpeggiator and a sustain button for holding notes. The 8 pads have a backlight. Power and MIDI data are both sent via a single USB cable.

Installing the keyboard is a breeze. It doesn't need any extra drivers to work. You simply plug it into the USB port on your computer and the drivers are automatically installed. It should work on both Windows and Mac, though I've only used it on my Windows 7 machine with no issues. It also comes with a software to help you assign the keys on the keys to various functions.

The best thing about this keyboard are the velocity-sensitive drum pads. This doesn't come as a surprise because the controller is made by AKAI, the same company which makes the MPC. They make for a very enjoyable experience when programming drums. To really enjoy it though you have to have your latency setting set as low as possible on your host so that you can enjoy the instant feedback. I've personally used it for composing drum patterns and for triggering patterns in FL Studio's performance mode and it is very enjoyable. There's a bank button on the unit which you can use to assign an additional 8 sounds to the pads, so in essence you can assign a total of 16 sounds to the pads.

Another handy feature is the memory bank which allows you to program the keys & knobs to suit your DAW. So every time you use the keyboard in your DAW you don't have to reassign the keys. You can save the settings of up to 4 different DAWs, meaning you can quickly switch from DAW to DAW without having to re-program the keys. This particular feature is very convenient for me because I often work in 2 DAWs (FL Studio and REAPER), sometimes 3 (Studio One) so I never have to re-program the keys when I switch.

The piano keys themselves are sometimes unresponsive which can be quite frustrating as well as the USB connector which is not of good quality. I've damaged mine due to its flimsiness and have to sit carefully with the keys to make sure they don't move around too much which is annoying.

Overall the controller does the job that it's meant to do, the drum pads are great and it comes with a decent amount of features. As a production keyboard it meets my needs. If you're a mobile musician this keyboard will come in great when you don't want to take your bigger gear along with you. It's best feature as far as I'm concerned are the drum pads. It also works great in FL Studio's performance mode. I'd have to think twice before buying this product because of the fragile USB connector and the keys which are sometimes unresponsive. I have come across some better keyboards such as the SubZero SPC Mini Key which has a lot of the same features and is more durable.

Cons:
- Keys are springy and sometimes unresponsive
- The USB connector is easy to break