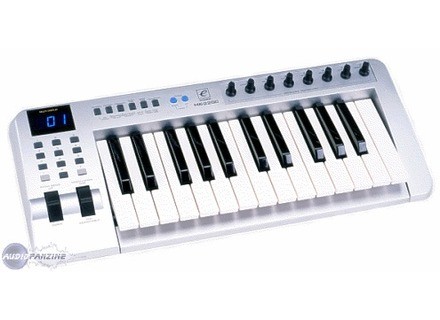 Value For Money : Excellent
View other reviews for this product:
I took him because I needed a small keyboard to play little or THEME environments without having to change from my radium pRSET every five minutes. And as it has knobs for pRSET ...
MIDI OUT connector, USB, pedals and a power socket for power supply.

The touch keyboard is not perfect, but I think by being a good piano, a Rhodes or an old organ, the touches of synths are never great wonders. But as we will not play Chopin on a two-octave keyboard, touch me.
The big plus for me is very simple to configure, change MIDI channel is quasi instantanment, unlike the Radium (true head case) for pRSET buttons are excellent and instantaneous. I am less a fan of rotary knobs, but I only use them for the volume and pan of my midi channel. Their programming is very simple (nothing to do with m-audio)
Assign-press control
-Turn or press the edit
-Assign a control change.
ottoman, two seconds!
The manual looks pretty succinct, but it is not just because the South is relatively the same from one device to another.
I put a new one because the keyboard is not really super comfortable, not super super ractif (but a hundred times better than the radium I think.)

PS: Take 425 version instead, and go for the soft Enigma, which can set by dragging and dropping assignments of knobs

- I for a week, and I think I sell my radium to make a 49-key evolution. They seem much more suited to those who pass the computer music to the game live. The must is the knobs to change the pRSET and configuration very simple and almost instantaneous. The least is the touch, but a two-octave keyboard, it takes not to play the virtuoso in gnral, so a bit of a false problem (and it's only a matter of flavor ...)
I tried a little radium and prs all models, to Doepfer, but must of the must expensive.
good quality price ratio, even if I find a just another piece of plastoc two son fighting in a duel, but hey, it remains the most affordable.
With exprience, I sell radium, or I roll it to me in hand dfouler and j'achte Evolution.
Modified:
The machine has less than a year, and the controllers no longer send any messages, probably to a microchip dfectueuse! J'espre be an isolated case ...
I put 10, I divide by two for this reason
See the source
Did you find this review helpful?yesno
Cookies help us improve performance, enhance user experience and deliver our services. By using our services, you agree to our use of cookies. Find out more.