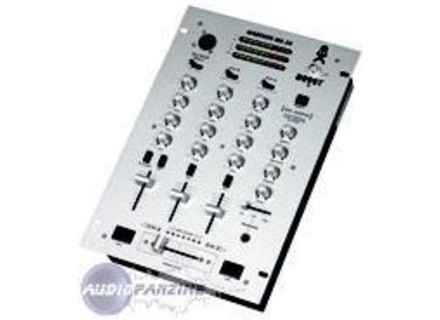 I prcise the MODEL I bought a t in time and therefore no manual or anything, just the table.

The table is very simple to use, does what is asked of him neither more nor less. The prsence a connection for a lamp is convenient not to mix in the dark.

The console is relatively transparent priori, I have not heard anything strange, but I did not push too much background in the knobs. Level breath I hear anything either, but no test that a. The qualizer along well it does what is asked of him. Forcment more useful in cut ...

Could not test the mic, they died on the MODEL I bought (OCCAZ).

BPM counters are compltement against by most fantastic time. It Relva to the best of the joke, at worst a scam. Finally the price was to be expected (MODL OCCAZ of 30 euros, can still be findable in nine 140 euros). Same for the indicator dcalage between beats.

The faders of channels are pretty without being too easy lches dplacer in error, so perfect. The crossfader is pretty hard, as the faders. Pretty teacher, prevents use of a pure mix (techno, hip-hop), not to mention that it is not paramtrable not effect cut possible. Also apparently he suffers from a problem because in the lightweight dplacant a ct to the center of the channel concerned loses power before the arrival at the center (as a should decrease after the center ...). I do not know if it's a problem my SPECIFICATIONS MODEL gnral or more.

The knobs are solid and do not crack, so perfect.

Edit 6 months later I realized that the fader between prcoute Cue Mix and has a small problem of transparency, even fully left (Cue so) with any PFL button pressed you will hear a Mix the tiny bit gnral in the headphone. Nothing so problmatique all Manir in noisy environments you hear anything, because the one must be careful to hear.

Similarly, the problem of falling in the center seems to have disappeared with time, and the faders have become much more flexible dplacer, he had only a little practice in fact.

I use it for two days to animate small accessories with friends, but for events like weddings, FTEs everything, may as well pass trs. It's more of a destination table that mobile disco DJ hardliners is clear. And such use is perfect.

The quality and solidity seem to go, it seems to last long.

The advantage is that we are few prs everything you need on a table like gemini mix everything, except the effects, but on a low-end MODEL. For example, the fader and PFL mix between final mix is ​​fairly rpandu on the low end and trs apprciable to mix.

If the problem of the crossfader which lowers the volume before the center s'avre gnral all units of this model it is clear that I deprecated even if you want starting mix for cheap because you go shit with a.

BPM counters was nice but nothing more, do not expect that to help you mix.

At least for the mobile disco that's great. In addition to this rack so it's great. Voil ...

8 because it's low-end that is what is asked, but it is on that side of gemini, numark etc of a not compare, but this is not my purpose sense.

Edit: APRS 6 months of use I can say that better than the discomobile this table is a real charm to use. In mix electro / techno is pure happiness because the BPM counters with a work so beginners but also it is super strong, gnialement practice. In short it is the happiness bar I paid 30 euros OCCAZ so it's a super good investment
See the source
Did you find this review helpful?yesno
Cookies help us improve performance, enhance user experience and deliver our services. By using our services, you agree to our use of cookies. Find out more.