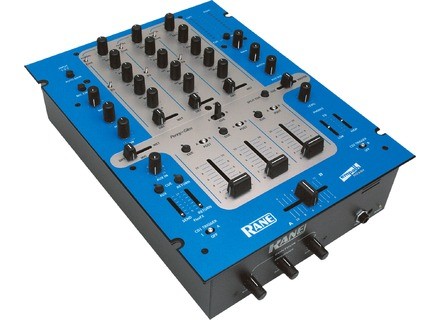 View other reviews for this product:
CHARACTERISTICS simple mixer with 3-way RCA inputs for phono and line on each track. A CAR also between auxiliary, indpendante channels 1, 2 and 3. A section of the table is only feature effects (flexFX), I will not comment, for dfault of external effects processor (though it looks possible to effect a precouter headphone before Intgr in the mix, while controlling its intensity and for each way ... looks interesting
In terms of output choice is great, since the XLR formats (for amp sound), 6.35 (for a recording with a sound card for example) and RCA (to connect a hi-fi if you have any dj d pens to buy the table and you have more on the amp for sound, for example

are REPRESENTATIVES, respectively for the main output, the booth output, and auxiliary output (all r adjustable volume).
EQ at the top, cut a range frequency drives it REALLY cut in + pan on each tract, gnial.
At the autogain ... L against it by say another gadjet a useful tool, the compensation of middle and treble when blows are low is too leve, used so as to see and measure mixes .. .
For the microphone I let other people take care to comment because when I mix cei I not talk at the same time hh

)
By precoute against the Super, one can rgler treble and bass in the headphones, listen in one ear and the master disk in the other stall, or costs in both ears that the disk n is not (yet) Intgr to mix, or cost as the master, I like all these possibilities.
Penny & Giles faders magntiques ... is it only necessary to say more ...

The center lane (2) is to zap the fader curves, but instead these curves (for other ways and cross) are prcises.
Cd's triggers, for lovers of platinum cds ...
I would personally put ten CHARACTERISTICS level because they are complete for the use I make.

Using ultra simple (as a majority of mixer dj Intgr no effect), we repert easily. The story of costs diffrent in the headphone is very simple to understand as long as one understands some English (not need to be a beast) because the manual is in English entieremment however, but it is not uncommon ... If not speaking of the manual everything is explained clearly.
At the position of features is really good trs tudi hat!
The components are robust air, but only time will tell ...

So l. .. trs's the strong point of this table, the sounds are awesome, excellent reproductions, many table can get on his knees before the i. The bass is irrprochables and good powers, the middles are middle, and treble clear in clear!
Only positive on this aspect!

I've had today and I pass my Journe above, I had been strongly advised, and thank you for doing so. Trs's premium, the price is affected Obviously for a three-way console, but I have a dj Journe had time to understand why exactly that price. I have a DJM600 mix of weekends ago, which is a dj trs good food, but the rane is even better! No hsitations be between this table and another, choose it!
See the source
Did you find this review helpful?yesno
Cookies help us improve performance, enhance user experience and deliver our services. By using our services, you agree to our use of cookies. Find out more.