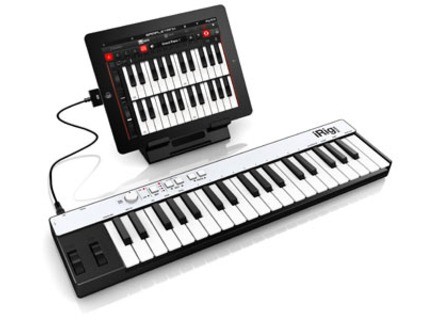 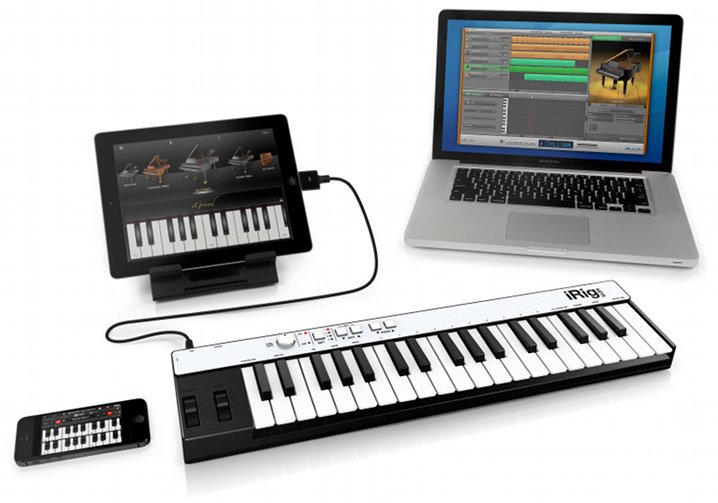 Small enough to fit into a backpack, iRig KEYS is designed to work on iPhone, iPad, iPod touch and Mac/PC. It is also bus powered, via the dock connector on an iPhone, iPad or iPod touch, and the USB port on a Mac or PC.

iRig KEYS works as a mobile controller for iOS MIDI compatible instruments and studio apps, including GarageBand; IK's iGrand Piano; the iOS and Mac/PC versions of SampleTank; as well as MIDI-compatible software or DAW plug-ins for Mac/PC.

The keyboard is equipped with mod and pitch wheels, 37 velocity-sensitive keys (enough for two-handed parts) a MIDI programmable knob, and an input for a sustain pedal or an expression pedal.

Five backlit soft-touch buttons are provided for editing, including Program and Octave up/down buttons, and a SET button for saving and recalling up to four user presets. In Edit Mode it's possible to transpose, select one of six preset velocity curves, set the MIDI transmit channel and program change number, and assign the knob to a particular MIDI controller.

iRig KEYS comes with free apps for iOS and software for Mac/PC. For the former, users can download SampleTank FREE from the App Store, which provides a collection of 68 sampled acoustic and electronic instruments, or iGrand Piano FREE, a piano app.

For the Mac/PC, iRig KEYS purchasers are entitled to a free download of SampleTank 2 L, a sampling workstation (plug-in or standalone), which normally retails for €59.99 ex VAT, and comes with a 2GB instrument collection.

iRig KEYS is priced at €74.99 ex VAT and is now available from musical instrument and electronic retailers and from the IK Online Store.

The SampleTank FREE and iGrand Piano FREE Apps are available for free from the App Store on iPhone, iPad and iPod touch or at www.itunes.com/appstore.

For more information and video demos, head to www.irigkeys.com.