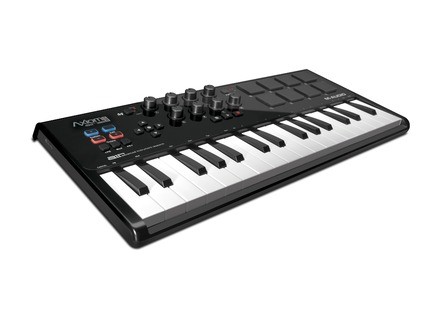 Buy this productView price information >
View other reviews for this product:
I like the fact that it's portable and the hyper control integration pledge, but...

Cheap keyboard, but it's OK, considering the format

To this day, axiom hasn't released the hyper control drivers for ableton, cubase nor logic. Which makes the DAW integration promises completely false. The situation has been the same for 3 months and M Audio seems not to care about the unhappy users that express themselves in the forums.

But that's not all: The key to switch octaves (on ableton 9, anyway) makes you go semitone per semitone, which makes it perfectly useless.

It's way of handling MIDI is also a bit strange. Even if you don't change a single parameter it seems to keep sending MIDI, which makes it useless with ableton live, since the latter thinks that you are trying to change a recorded automation, so it deactivates automation reading.

I had my doubts concerning M Audio and I bought this product because the mpk mini wasn't in stock anymore. It goes without saying that I will never trust this brand again.
Did you find this review helpful?yesno
Cookies help us improve performance, enhance user experience and deliver our services. By using our services, you agree to our use of cookies. Find out more.