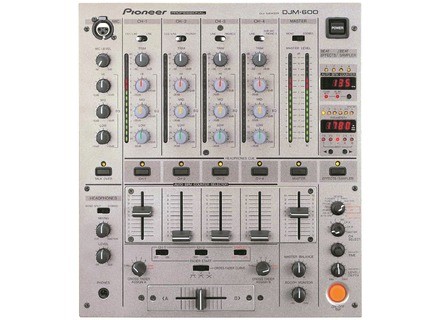 DJM-600, 4+ Channel Mixer from Pioneer in the DJM series.

View other reviews for this product:
connection: we dream, not even a master XLR, so big loss in level and quality, and already it's not the sound ca ... Although its role is not used to making speeches, the microphones to allow designated

certainly well setup, functions of the simplest, I do not even have the manual.

transparent console? but then not so! of breath? not had time to try and do not want

I used it one evening, I ordered a vestax pmc280 who had not arrived so I got to pay the 600. I had only read some contradictory comments on the consoles pioneer, but then the AC has exceeded everything I could imagine.
level of power is the catastrophe. Gain background, I am sometimes just to 0dB. The diodes are ok, but honest, put a diode to 1 db is tellment useless. La presion tell me it does. bin and before thinking about the diode, should consider the console. The effects are generally pretty easy to use as the table that is very well organized, except the master Knob stuck to the line 4. Thank you!
is the sound of anything. Even my old AudioPhony done the same! and then I'm good so that FCR not tell me it's my system.

I do not understand how one can love this table, especially for what it costs! ... except for ergonomics / effects in a pinch.

anecdote: I make my microphone talkover engaged. I no longer think. I start the evening off microphone. Stress and pregnancy: everything thoroughly, I leave nothing. qq minutes after I talk over the pops and AC "Pete" (well as a 600). I see no point in this damned talkover which is supposed to act only when using the microphone! That would mean that every time they are used, there was a big flop musical. really great. Normally, it acts intelligently but must believe not.
See the source
Did you find this review helpful?yesno
Cookies help us improve performance, enhance user experience and deliver our services. By using our services, you agree to our use of cookies. Find out more.