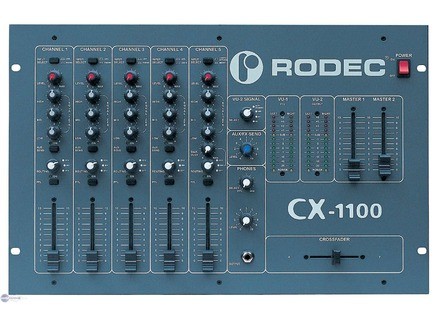 Non-parametric EQ + / - 13dB, so no one but kill pataque incredible and a copy of adjustable linearity.

No effect integrated but the first 4 tracks are assigned to the EFX output.
I would add that for the FX Send PRE FADE is original, it is possible to change it by removing the back cover of the console and changing the two DIP switch for each enter the POST FADE.

In this case, it allows sending all tracks in the FX and returning the track 5 (to talk over the bottom flange to avoid the overlay track) to use a box the same effect so if it was wired in Master output but with the benefit of having the effect on all outputs and the REC.

So you can have the facade of Master 1, Master 2 and return on record REC with a normal signal (0.5 V) without having to leave the Master in depth and all that with the effects of your Inbox.

I regret that it is not POST FADE factory which would avoid having to open the console.

There is no unnecessary buttons or gadgets, just the basics. Operating childish

Everything is accessible, the space is good exposure everywhere.

The manual is clear but frankly useless.

While a zero on the equalizer = original sound.

It gives the breath, but if you want to hear, will have to put everything back on it and a big bottom amp ... Maybe you hear a little something but make sure it is not your amp that you hear.
Not without laughter, the breath is typical of most console, that is to say almost nothing

Equalizer Bass / Mid / High + /-13dB, It looks light but I do not know if it must rely becaufe when one types a bottom, the console shows that it is in the thinking and is not nothing, the big sound Rodec!

What I like is to try to see what it feels like a table with this range.

J'au and triturated seen a lot of consoles, next gadget is all ... Even Pioneer, is considered a dwarf next to it, here it's tough. Other interresting aspect compared to older consoles mx180mk1 and others, the soft knobs, it is the pleasure of cutter!
Also note that the pot are master tracks and up to 90 ° and behind a metallic plate which prevents dust from falling in, we would Appriciation the crossfader is entitled to the same treatment. Etand given the internal architecture of the console, I think the accidental spillage of liquid on it should not be fatal because no circuit is found in a jar entry as possible and are protected by being mounted at an angle. (This is not a reason for this sacrilege commetre eh!)

Console expensive, but the price of a "real" console pro.

Ben before having to buy a Rodec, will there be the sound that will go through because this stuff is indestructible.
See the source
Did you find this review helpful?yesno
Cookies help us improve performance, enhance user experience and deliver our services. By using our services, you agree to our use of cookies. Find out more.