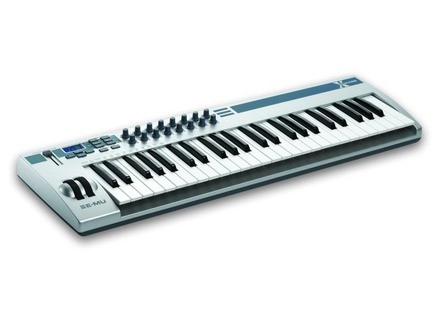 View other reviews for this product:
(Originally written by barbilux/translated from Audiofanzine FR)
I was looking for a compact keyboard to play my hardware and software synths (I already have an 88-key model).

This keyboard provides after touch (very good) but I miss a breath controller connector. Sustain and CC7 (volume) use the same input connector so you'll have to choose one.

Good playing feel, which doesn't mean a lot, the dynamic response is more important and I like the way it is adjusted because the playing is very responsive!

Many functions and it's rather difficult to remember all of them. The small three-digit display is not enough and you'll have to search in the user's manual pretty often.

The function buttons are convenient.

I don't use the software.

I've been owning it for two years but I don't use it that often because I placed it on my DAW's desk and I don't like to play when the keyboard is too high. I can't say if it's sturdy but I think it was conceived for home use rather than stages. The plastic keys don't seem to be very sturdy...

It's ok to trigger instruments in my DAW but a five-octave keyboard would be better to play with both hands.

I like the USB connector and the blue LEDs.

You get a very comprehensive Midi interface at an affordable price. I had no problems with it in spite of all the things I read about its reliability.
Did you find this review helpful?yesno
Cookies help us improve performance, enhance user experience and deliver our services. By using our services, you agree to our use of cookies. Find out more.