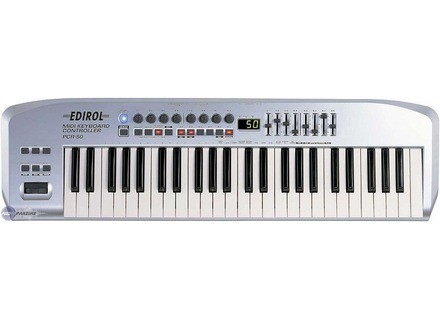 PCR-50, 49-Key MIDI Keyboard from Edirol in the PCR series.

View other reviews for this product:
Keyboard controllers-Matra with twelve o'clock Intgr: potentiomtres 8 faders and 8, plus a flopped all assignable buttons ...
Can be used to control virtual instruments or CONTRL used as the surface squenceur.

There is a ingnieux Systm of interchangeable caps to denote the function of each controller.

When used with USB, it also acts as a USB MIDI interface with an I / O supplmentaire.

The keyboard is in him even trs good quality touch is firm and enjoyable.
The Systm to select channels and banks is well thought out and practical.

The manual is comprehensive and clear plutt.

Several programs are Intgr original assignment (GM2, CONTL surface for Cubase, Sonar, Logic ...) but I have some problems with ...

For example, the program default, the GM2 is clearly not suited for most controller virtual instruments ... I do not know the diffrence between GM and GM2, but you end up with weird about the results, the kind that changes the cutoff on the soft-synth when we manipulate the fader of attack) A priori there is only the virtual intruments GM2 as a standard work properly (and I know there qu'Edirol that uses the standard GM2, for now). It is not impossible that these are the publishers of virtual instruments wrongdoers, I'll bone up the docs!

Mode controller for Cubase does not function at home, however. The buttons for the transport bar acting, but not the controller's faders senss mixer. May be qu'Edirol prvu had this program for Cubase VST and it does not work for SX, which I use ... I did not test as Sonar or Logic.

In short, j'tais happy to see that the controller silent pr-configured but I feel that I will be even when forced to reprogram myself even (trs procdure well explained e in the manual, thankfully).

I use this keyboard for 2 weeks, he replaced an Evolution MK-361C. There is no comparison with the old who had just cost less. Touch is really enjoyable (it's a Roland keyboard, APRS all) the quality of manufacture is impeccable. I think it's the MODEL the most successful of all keyboard / control surface available today (those of Midiman compartment or Evolution).

Otherwise, a dtail, but personally I love the look

Finally, as for most products from Edirol, the report qualitprix is ​​really unbeatable, with manufacturing again in a serious pro and consumer price trs. Espron qu'Edirol continue this price dmarche emissions in the future (the subsidiary company of Roland is still young).
See the source
Did you find this review helpful?yesno
Cookies help us improve performance, enhance user experience and deliver our services. By using our services, you agree to our use of cookies. Find out more.