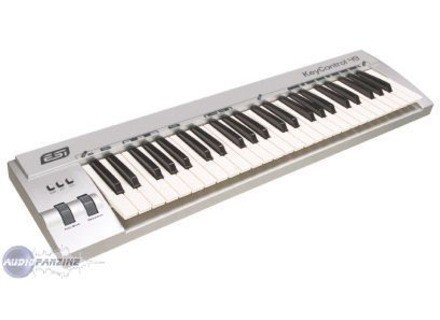 Value For Money : Excellent
This is a basic keypad bte 4 octaves is plutt dynamic touch to the computer:
<ul>

MIDI (not of MIDI damage)

Modulation wheel can be assigned to volume, reverb, chorus or pan (a pity that the pitch wheel is not do as well)

Easy to use: no need for instructions ^ ^ Windows XP, there is no driver needed amme

)) In addition, it is lightweight and portable ^ ^

But against the MIDI name of the device to be chosen in the software you are working with causes confusion: "USB Audio Device" ... They might have to be careful that all of the same: they could name their driver fawn that it is clearly identifiable ("USB MIDI Keyboard" for example), this made many viterais t for your ceului has several MIDI peripherals and can not "find" his keyboard ...

ATTENTION: Ms. branch in USB, you must activate the POWER ON button to work (we tend to think that this button is used to dye the allummer or only when it is a standalone boier external power).

DOMAAAAAAAAAGE it lacks the MIDI, which prevents it from plugging into the computer with a USB deuxime keypad on the same cha no MIDI! To work around this, the only way is to use it standalone and the head string to connect the MIDI and a MIDI port dernire other (USB, for example ^ ^) . Or connect the second MIDI keyboard to a second USB port on the computer (but this one second string MIDI CRER).

Too lightweight: live, he would not stand a synth it moves, it changes its place, especially when the musician s'clate above ...

Missing a small notch at least the No. indicating the MIDI channel on which it is rgl

Casing of the external power supply is optional (because it is intended primarily work with the computer, see) and more, it is difficult to find one that works. My own ad be modified in the polarity run for it to work with ...

No CD-ROM is supplied with: Users of Windows 2000 and Windows ME should Tlcharger the driver on the manufacturer's website, forcing them to have an internet connection (but does not today, see? And these days, everyone has Windows XP on his machine, see)

Does not work with Windows 98

Look not so good, with touches jaunetres instead of white, but then, well ...

</ul>
In fact, this keyboard lacks universalism and it's a shame. Well, in my case, I have to buy it as an emergency, having sold my Technics SX-KN2600 and having problem imprvus to redeem myself another arranger, he has had I I found something that allows me to work even when, with my rack and my botes rhythms until the crisis is rsolve ^ ^

I do not would do the same choice: I find myself Chernobyl matre USB MIDI keyboard which also has a MIDI input and, surcoat, with an octave again, once prochane ^ ^
See the source
Did you find this review helpful?yesno
Cookies help us improve performance, enhance user experience and deliver our services. By using our services, you agree to our use of cookies. Find out more.