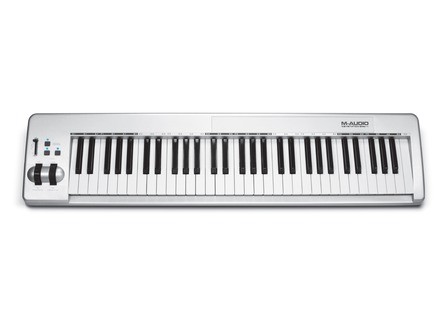 View other reviews for this product:
This is a review of the M-Audio Keystation 61es. I was watching a video on YouTube of a young producer using a MIDI keyboard. When I started producing 2 years ago, I needed something like that, because, I as well am a young producer. I wanted my first keyboard to be easy. I was ignorant, but out of luck, I picked a great MIDI keyboard, the M-Audio Keystation 61es. The USB port influenced my choice because I didn't know a thing about MIDI, or any type of connection. I was only familiar with USB, so I took the first big leap when it came to producing and purchased this keyboard for $150 off of eBay. I was extremely excited for it to come because it was a promising piece of equipment. There are a couple options, but keeping it simple. One of them was the ability for a sustain pedal, like a real piano. This is one of the couple essential features on this board.

When it arrived, I was happy because I had gotten just the correct amount of keys. It's no studio piano with 76 or 88 keys, but it's not a compact board with 25 or 49 keys. This was nice because it was a happy medium between the two. I was happy that it fit nicely on my desk. The keys itself are pretty solid. They don't seem thin, and they're semi-weighted, giving the action of a real piano. The setup itself was a breeze. In retrospect, I don't even think I had to install anything. I think that the simple USB connectivity made drivers unnecessary. There isn't much of &quot;channel selection&quot; because it's such a simple keyboard, but the octave up and down buttons were useful, as well as the solid pitch bend and modulation wheels. In terms of the manual, I never had to look at it.

I have been using it for around a year and a half. The thing I like most was the ease of connectivity and compatibility. It was a breeze to install, and works in almost every DAW. I didn't try any other models before I bought it because really, I didn't need to. A con of this board was the lack of faders or knobs. However, if you are just doing some simple keyboard/melody work into your DAW, faders and knobs are just a luxury, not something that is essential. The price was fantastic, as I had gotten it $50 off. I recommend this MIDI Controller to anybody who really needs to get started with a simple, efficient, and easy-to-use MIDI keyboard.
Did you find this review helpful?yesno
Cookies help us improve performance, enhance user experience and deliver our services. By using our services, you agree to our use of cookies. Find out more.