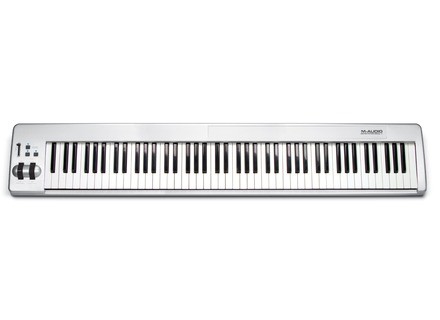 View other reviews for this product:
The M Audio Keystation 88es comes with the very basic features that you expect from a decent midi controller keyboard, including MIDI ins and outs, USB, a DC in port (but no included wall wart, which is no loss since the unit can be powered by the USB cable), an input for a damper pedal and one other footswitch. Otherwise, it's a fairly sparse, no-frills controller with only pitch bend and modulation, a volume slider and a pair of buttons that implement the octave up/down function in case you have a Bosendorfer sample or some other reason to expand beyond 88 keys. That's in stark contrast to the Pro 88, which has yards of knobs and faders that should let you control everything from your VST instrument to your DAW mixer to the small appliances in your kitchen. This is not the only significant difference, though. I played the fully weighted keys of the Pro 88 at a local retailer, and it is more pleasant than the semi-weighted keys of the 88es, which feel stiff and decidedly plastic and synth-like, more so even than my old synths, like the M1 and Juno 60.


Overall, this is a good 88-key controller for under $200. There has been some criticism about this product because the keys do not have "piano action", but it is more responsive and has a better feel to me than my FantomX. If you are looking for an 88-key controller and don't need the frills of some of the pricier full-sized boards, you can't go wrong with this one!