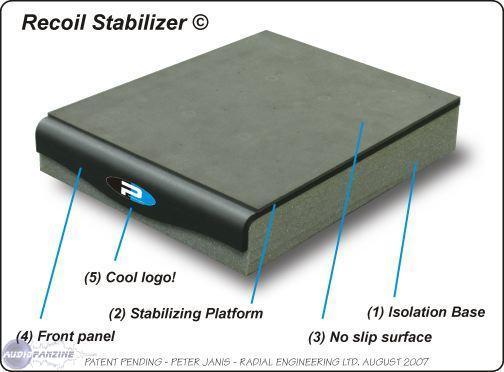 Accessory for studio monitor from Primacoustic .

View other reviews for this product:
mooseherman

« Great addition to the studio! »

Publié le 12/14/10 à 13:10
This is a recoil stabilizer. What that literally means is that it'll prevent your monitor from moving due to vibrations in the surface of where the monitor is placed. This is good as too much movement will potentially allow the monitor to fall, almost certainly causing damage. While this is the primary use of this device, it's got a lot more benefits than simply keeping your monitor in place. For one, it helps the monitors achieve their full potential. It'll absorb the low end as well as much of the other frequencies, and that will result in a much clearer mix. The problem with monitors quite often is that they tend to have a problem with the low end vibrating through the surface that they are placed on top of. Not only do these prevent that from occurring but they also tighten up the low end quite a bit and make it a lot clearer to listen to. This effect will work regardless of where you are listening, but will definitely be more pronounced in a room that is geared for mixing. That said, these are really effective for home studios as those rooms will certainly need to be as fixed up as possible to ensure good mixing. They won't magically transform a room with poor acoustics into a mixing room but they'll certainly help quite a bit.
This will take your mixing capabilities and monitoring capabilities up a notch. What's best about it is that it'll do this for a very little cost! They only cost a hundred bucks and that's a pretty phenomenal deal if you ask me! Considering that they're slowly making their way into all the major studios now that everybody knows how good they are, you may see a markup in price so I'd say that you are better off getting them soon!
00