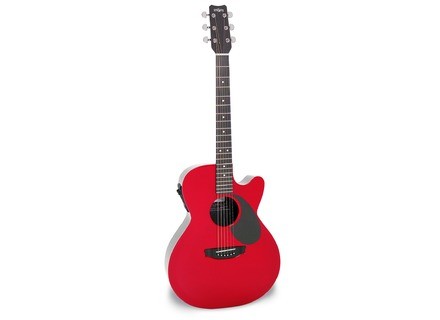 At once I liked the sound of the guitar, maybe because it seemed very fresh, clear, and distinct compared to all the wood-guitars I'd been trying for a lot of time that period. Also liked the way it amplified in a PA, the element lr baggs is a much better choice for this guitar than the fishman stereo blender (I tried them both on this model, and noticed a considerable difference) The only drawback is that it feeds quite easily, probably because of the big room in this guitar, the OM-model probably feeds less with the same pickup-system. with the bass and treble controller equally set it sounds well, but feeds, and then often you have to compensate giving less bass and more treble, and then it sounds abit too sharp (too my ears)

Also I liked the way chords sounded, it's very clear and very in tune all over the neck.

Also there are many clear benefits with the carbon, I can send it with plane without worrying that it would break, I can take it anywhere, warm, cold, humid, and it's constant in the neck. I needed a guitar that was suitable for travel, since I went back and forth between Italy and Norway at that time to do gigs.

U can also tune it like you want, and it will be very in tune all over the fingerboard, because of the strength of the carbon-neck.

It records well and have it's own sound, especially for finger playing it's great. Also works with a pick, although it can be abit metallic sometimes.

The sound can be a bit metallic sometimes, especially played with a pick. but played with fingers (or maybe nails) it sounds very soft and sweet and clear.

Also it's not very feedback resistant with the big body resonating and creating hums of feedback quite easily, important to figure out a good placing with the guitar, away from PA etc.

But the amplified sound is very good though, the element by lr baggs lot better than fishman.

Doesn't sound the same as a wood guitar, that's why I'm still looking for another guitar for straight acoustic jazz purpose with a pick.

Good quality, remains the same condition, careless where you travel, and careless of how you treat it (I've had several bumps in it, but of course the carbon is very solid, so it keeps well)

I do not regret buying it, the perfect on the road guitar, that also gives other musical possibilites than other guitars with tunings (and keeping them) etc. Happy to have it, and would probably replace it if I lost it or got stolen, even though I notice it's not the guitar I use most often (since I very often prefer nylon string or electric)