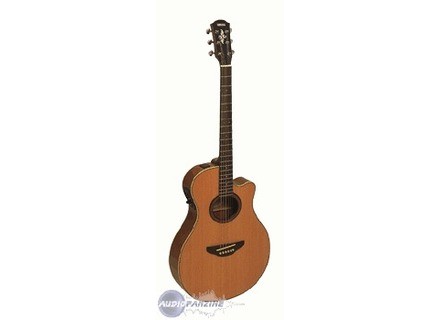 View other reviews for this product:
I originally bought this guitar at Music Showcase in Pa for about $450 dollars. This was about 6 years ago and up to that point was the most i'd ever payed for a guitar. Not knowing a great deal about guitars at that point, I bought it because I thought it looked nice.

I like the looks of this guitar, and it doesn't sound too bad plugged in but other that that, nothing.

Well for starters, for the price or maybe a bit more, you can get a much better guitar. When this thing isn't plugged in, it only sounds decent on a new set of strings for about a week. The guitar is also made of cheap wood and plastic and the tuners just downright suck. If your looking to spend between $450-$600 dollars, get yourself a low end martin and have it drilled out or buy an alverez. For the price Alverez makes some really great sounding guitars.

Like I said earlier, this guitar is made of cheap wood, crappy tuners and plastic. The action is relatively high and it sounds like crap when its not plugged in.

Bottom line if your going to spend the money for one of these guitars, don't. Or at least take your time and try to play some different guitars because there are many better guitars out there in this ones price range. I have since bought a Taylor 314 and its just great. But thats a whole nuther ball game.