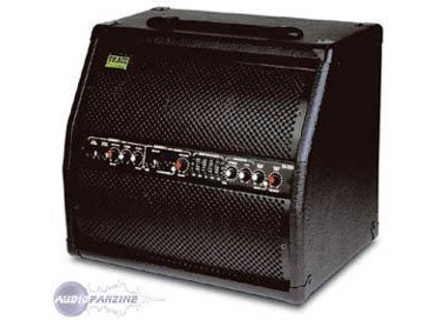 «  amps for acoustic musicians and singers »
5

The connection is super UNESCORecords:
- Guitar channel: 1 for Electroacoustic between "normal", so for pizo + prampli battery and a microphone between the magnetic or electric guitar is for those who use microphone rosette (like me). Tone Gain + (severe acute +).
- Symmetrical XLR microphone channels (with 48 V phantom ") or asymmetrical jack. Another Knob gain.
- O "link" line level particulirement be useful for attacking a pregnant amplifies if the watts are missing, either to return a third source of sound, rhythm box or other.
- External effects loop (2 Plugs)
- Console output XLR direct output prampli APRS or the correction, effects etc. ...
- Jack for a pedal to cut the effects

The manual Fran is very clear, but the amp is intuitive enough so that we can do without. The only "trick" to which we must do is push-pull on the volume of each channel to enable rverb.
Get great sound is a breeze.

With other acoustic instruments like the violin, for example, it behaves very well too. No feedback on the treble, nice bass response.

I plugged my Lowden S10 (MODEL basic course, but all the same made by the master itself and with 24 years of a team bonus ...!) micro seymour duncan "woody" XL. Claps well picking ... For small bars I prefer the sound directly into the microphone and amplifier. After having tried just

prs everything that is on the march marshals, the Montarbo the EAR ... I think this is the one that reproduces best the sound of my guitar. The rolls
See the source
Did you find this review helpful?yesno
Cookies help us improve performance, enhance user experience and deliver our services. By using our services, you agree to our use of cookies. Find out more.