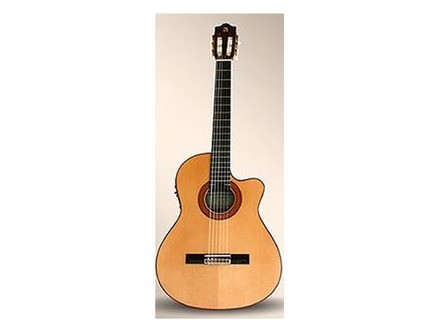 Perfect ergonomic handle very nice, obviously no curl. Access to treble is very good and very fair. The mechanical precision of a watchmaker and a reliability. We can take his guitar after several weeks - even if it never happens

, the tuning will not move or so.

Acoustic it sounds with power and roundness. It's very nice, especially in flamenco or Latin in general.
In electronics, you have to play more refined thanks to the mix or micro piezo, which keeps some true sound of the guitar. With a good amp electric, it's thunder, but even with a simple Roland are obtained for electric sounds with some interesting effects that blend well with the guitar (chorus, delay ...)

I've had about 5 years, it's my little gem that I protected in its case (flight case) to prevent toddlers do not spoil! I hesitated a Takamine acoustic but it sounded really "box", nothing to see.
The only caveat I would make would be on the Fishman Pro Blend which emits a small vibration in acoustics (but may do tighten a screw, or not much anyway.
See the source
Did you find this review helpful?yesno
Cookies help us improve performance, enhance user experience and deliver our services. By using our services, you agree to our use of cookies. Find out more.