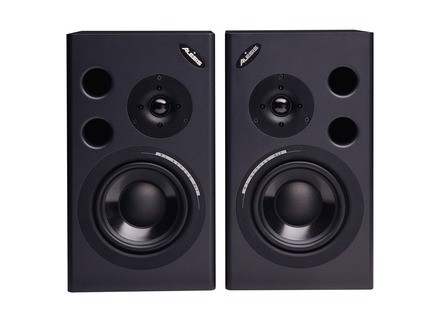 M1Active MKII, Active Monitor from Alesis in the M1 series.

View other reviews for this product:
Very good on paper ... a little less attentive. Purchased in late September 2003

These are my first monitor speakers and I have been guided by the sellers after having had MSP5 Yam listening. I thought these were too much in the midrange and not enough in the bass, it's certainly what motivated them to sell me the Alesis. I can not absolutely say that I regret this purchase, however, it is difficult to make a proper mix for Ambient music. General feeling of softness niveau.Les low frequencies are obviously lacking the bass too cumbersome to puff a little more discrete mediums too. I have no complaints on my part of the treble. Everything is very listenable on gender more dancing and loved the atmosphere they give color to a CD of Diana Cralle (especially on his voice).
I think for some time to buy Yamaha MSP5 I did not want at the time but keeping the Alesis. My opinion is that all s' would balance perfectly. Each has strengths the other missing. Of perfect opposite in fact I could be wrong but I am novice.

What I find even more disturbing than its color, it is the volume buttons to betray me already after just one year from very poor bill. A real Achilles heel that I have a bit across the throat
See the source
Did you find this review helpful?yesno
Cookies help us improve performance, enhance user experience and deliver our services. By using our services, you agree to our use of cookies. Find out more.