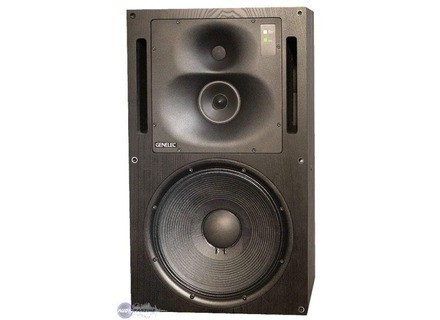 View other reviews for this product:
The Genelec 1038As are a high end pair of active studio monitors. Since they are active, they are self-powered and do not need any external amplifier to use them. These are a huge set of studio monitors and are more for the stationary studio rather than someone who might be on the go a lot. They are simply too big to move around too much, and are bigger than the 1031As which are a bit easier to move in terms of size and weigh.

The sound quality of the Genelec 1038As is top notch and is what I have come to expect from Genelec. These are a great set of monitors both for mixing and for monitoring. The sound comes in clear and does cover the entire frequency spectrum, with a great low end response and a silky high end. The stereo imaging is definitely satisfactory and the sound is overall precise and does represent a true picture of the audio you are playing. The dynamics are respected across the board and accurate. Overall, the sound projected from the 1038As is great and are a top notch set of professional studio monitors.

I've been using the Genelec 1038As for about four years and they are definitely one of the best set of studio monitors that I have used. I like them for monitoring best, as I find these sometimes sound too good for mixing and that mixes sometimes don't translate to a more modest set of speakers. However, they do work good for mixing, you just have to know them, just like any other set of monitors when you are mixing. The price is pretty expensive, but they are priced right and are aimed at professional engineers and professional studio owners. They are a great set of studio montiors that need not be overlooked when trying out the top studio monitors out there. Genelec has a reputation for making the best monitors on the market, as the 1038As are a prime example of what Genelec is capable of.
Did you find this review helpful?yesno