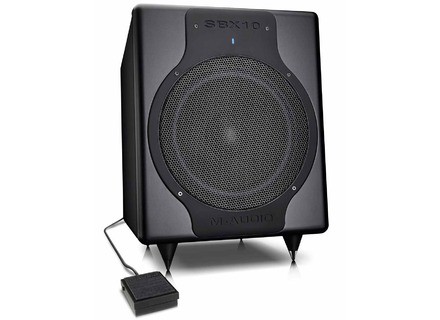 SBX10, Active Monitor from M-Audio in the BX series.

View other reviews for this product:
Ben is a box uh ... baaaasssses Voil .... all aaaaa ....
it serves to make the low ...
I prviens dj: I did not put 10 around the box because it's perfect, I have only one other test (the old m-audio MODEL) and I am not an expert in the Contents, so my notes would be meaningless ...

it is big enough (see manufacturer site for the character) and strong.
the grid on the woofer is a good thing it's fragile things l.
it's probably not solid wood home mre great, but what I heard when the record is even honnte trs. Volume provides some fairly consquent rendering capacity elsewhere.

Rglages Rear:
- On / off
- Volume
- Phase (phase rgler for monitors with touch ... not too much yet, but actually affect some aa. I left it in my case because zero is what allows rendering without empitement between the box and monitors, but must be reviewed for each configuration)
- High pass filter for monitors (which are then connected to it)
- Low pass filter for subwoofer

principle: the sound from the subwoofer, the subwoofer output on monitors.
the two filters are used to adjust the band frequency drives is left of the box, and that we send on the monitors. SETTING THE enables the phase when it was part of the spectrum to avoid common to both the phnomne phase which could cancel some frequencies.

in my case, I left the two filters at least on the same rglage (40Hz)
that's what prconis to the 'studio', as other rglages plutt orients hi-fi or home cinema. and indeed, if we send above 40/50 Hz in the housing, a low swell srieusement and rendering is wrong from a certain neutrality I confirm APRS try!

So with all rglages zero (except the volume sr good

) was a box to receive rgl trs low frequencies, which fills the lack of small monitors like MSP5 , or BX5.
was lucky, that's what I Cerchi

I'm not an expert, but I found a prcis relatively neutral (making sure to stay at least the filter for the subwoofer).

for a cost 'fun' can cause the filter and the sound, but the neighbors should not have because admont doors-windows

I redid some mix of songs with / without the box to compare.
an example that résumé: with our live dub (http://www.volfoniq.com - subliminal advertising) there are two pieces which (see below) so low taient RULES fotes (and in the lower spectrum) that makes the piece a muted limit!
I tried on a radio and a chain of living: indeed, gav low.
rergle I was on a song, sounds good on a box and monitors, I retested in car radio and hi-fi: nickel.

not much else to say.
it can be a NCESS not work if you know the eq and VU meters, but in my case has helped me a lot!
See the source
Did you find this review helpful?yesno
Cookies help us improve performance, enhance user experience and deliver our services. By using our services, you agree to our use of cookies. Find out more.