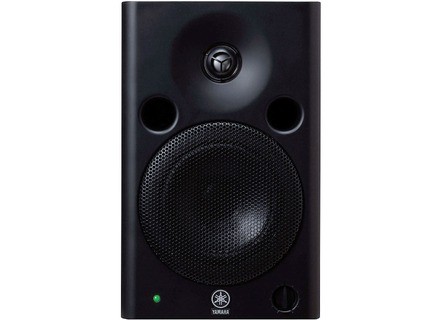 « My faithful and tireless speakers »
4

View other reviews for this product:
I needed something better than my hi-fi system to make electronic music with my PC! I was looking at classified ads but a musician friend of mine recommended me the MSP5, which were on sale. An important point for me back then, and still today, is that the vents are on the front, because I can place them close to a wall (I don't have another choice!).

Use: Home studio, after more than 10 years, they still work perfectly

No amp because they are bi(amplified), my setup consists only of two MSP5s connected to the outputs of an analog mixer.

I have not many points of comparison.

Frequency response curve: They lack deep lows (which is normal given the size of the speakers) and they have some sort of dip and a boost in the mids, which makes the overall sound more aggressive than with other speakers. I am so used to them that I have a hard time assessing sounds!
In any case, they have a very good dynamic response and at loud volumes the vents blow so much air with the kicks that you can use them as hair dryers! Beyond a certain volume you can hear air-swishing sounds from the vents, which is annoying (but only at very loud volumes, to rehearse with your deaf buddies, not a level you'd use for mixing).

I think they are best for rock, pop and similar, rather than electronic music or techno (especially due to the lack of deep lows).

After more than 12 years of use I still can't part with them (even if I bought some Genelecs, I'd still find a use for the MSP5s). I haven't tested any other models at my place but I have been able to use other ones in other home-studios: The big Yamaha 80W with subwoofer wouldn't suit me because the vents are on the rear and the difficulty to find the right place for the subwoofer. However, it's true that the lows go much deeper which makes it more comfortable to mix electronic music.

I have also used some Genelecs, which are certainly better... but the price is not the same!

I'm happy with my MSP5, which I know very well now. I also work with (good) cans since the kids' rooms are close to the studio. When a mix sounds fine both with my cans and the MSP5s then I can say it's okay.

They are solid, reliable, dynamic and a bit aggressive, you need to tame them (like all monitors), but once you do, it's a real treat to use them.
Did you find this review helpful?yesno
Cookies help us improve performance, enhance user experience and deliver our services. By using our services, you agree to our use of cookies. Find out more.