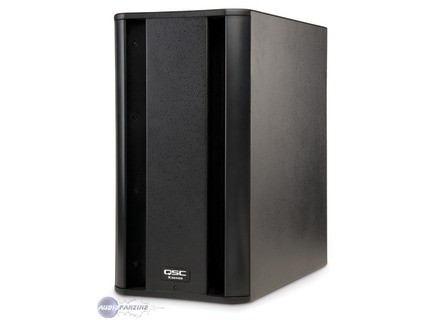 KSub, Active subwoofer from QSC in the K Series series.

View other reviews for this product:
The K Sub will give you the sound you need for your live set up. I have heard the QSC K Sub in over 25 different situations and venues and I don’t have a single complaint about it except for maybe the fact that it is not priced to sell. It cost 1200 dollars which did scare me off at first until the guys at GC explained to me that if I didn’t like it I could return it which kind of gave me a little piece of mind. But after hearing it there was no way that I was going to return it. It took our sound to a whole new lever when we used it at some of the bigger places we play at.
If you want to get studio type of quality on stage then this sub will do it. You will be able to give your listeners the same experience you have when being in the studio and mastering the song for the first time. The K Sub is a fully active dual 12 inch sub that has 1,000 watts and has some major thump to it. It has also pretty portable but it is nowhere as near as light as some of the other subs that we have used, so getting this in and out of the trunk does cause some problems because it weighs over 70 pounds easy. You can pole mount it if you choose and it has ¼ and XLR connections on it.
The frequency range is 48 to 134 HZ, which is pretty wide and it has enough power to get your small to medium sized clubs (indoor) enough thump to get the crowd moving. I have used several other subs from QSC. They make some really good ones but the K Sub is one of my favorites that they make.