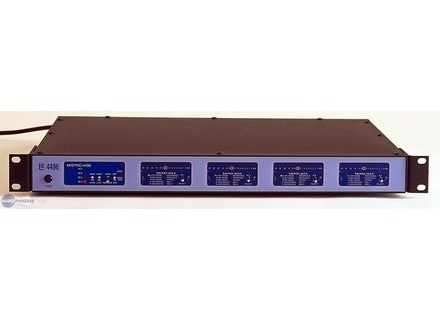 Lavry Engineering's Blue converter is a unique conversion system for analog to digital and digital to analog. It's unique in that you can mix and match different modules of converters and otherwise. The one that I've used just had converters in it rather than the option mic pre or sample rate converters. I honestly don't know all too much at all about using this any other way than as a traditional converter, but it's impressive that it's clearly flexible and versatile if you want or need it to be. I believe that the we have sixteen channels in total of AD/DA, but I'm not 100% sure about it. It's already set up and good to go in one of the mixing suites we have at the studio where I work, so I wasn't involved with setting it up or anything like that I either...

Judging from the way the Lavry Engineering Blue converter system sounds as a converter and based on it's versatility, I have to say that I'm a big fan of this conversion system. It's definitely something that you'll see in professional studios rather than in home studios since it is a high quality converter and isn't too cheap. It's definitely an adequate substitute for an Apogee converter, which seems to be the industry standard, but it also really depends on what and where you're going to be using it. I love the versatility you'll get with the Blue converter, but if you're just looking for a simple converter you might want to go with some of the Apogee converters. Having said this, Lavry Engineering Blue converter system is great on it's own and I'd love to have it in any studio where it was an option. These don't seem to be sold in too many places, but you can find them if you're interested. This Lavry is definitely a converter that I'd seriously look into if I were in need of one for my professional studio.
Did you find this review helpful?yesno