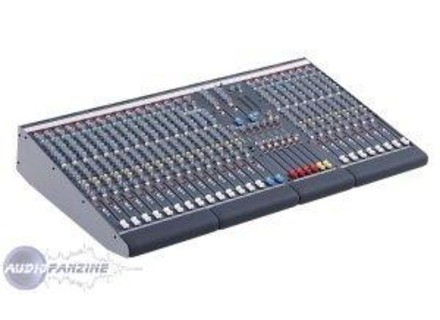 View other reviews for this product:
Analog console ... 4-band EQ, two fixed and two semi-paramtriques (except on the edges Stros, grrr ...)
Phase reverse, phantom power supply, switch mic / line, while a. ..
To 6, fader switchable prpost into two groups (1-4 and 5-6)
4 groups
All brothel standard oscillator, talkback
Possibility to reverse the masters of the groups and
Internal power supply, if I remember correctly.

Accs and use by anyone who knows trs ease a bit consoles. The construction and finish are of a quality even if carrment seems "cheap" compared my standards.
The most annoying thing is that there is "that there ...":" only "to 6" as "four sub-groups," only "2-band semi-param ... Well, OK, when you look at the price, is not complain too much ... The function of the inversion and groups, typical of A & H, is not bad.

I, analog, I like big stuff, I work all year on the Midas, DDA, the Paragon ... so I'm not trs goal either, but ... The console sounds (too?) Transparent, even if one feels one color lgre mtallique mdium in the blast. The gain can be a bit feeble, too, as is the EQ that you wonder sometimes if we do not forget to turn it on. I'm a big fan of the GL4000, and is nothing compared: with the EQ of 4000, we get almost a given r-snare. Well, OK, the price is also not comparable. By the way, I had a GL2000 hands, and sounded CARREMENT better, I think.

I used the console on a few gigs, such Balloch, or pools. Ideal for a small orchestra sound, great for the home studio enthusiast clear. Unusable for the real concert. The price is low lev for a console. We therefore pay for, but not much more. Buying smart, but not the steal gnialissime.

Ultimately, at the same manufacturer, the WZ 14:4:2 + is less CHRE, offers the same functions, and my ears sounds better (notice as inherently subjective forcment) . And on top rack is ...
See the source
Did you find this review helpful?yesno
Cookies help us improve performance, enhance user experience and deliver our services. By using our services, you agree to our use of cookies. Find out more.