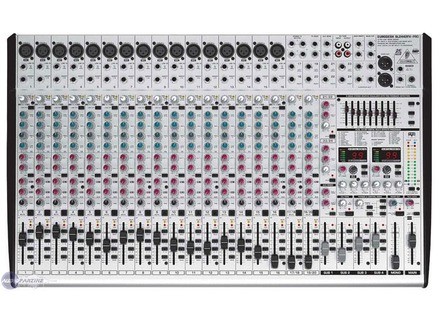 Eurodesk SL2442FX-PRO, Analog Mixer from Behringer in the Eurodesk series.

View other reviews for this product:
Behringer Eurodesk SL2442FX pro

The lack of "body"
The lens is too prampli and dynamics is low.
When the button is pushed prampli gain of 15.00 (more than three quarter of the way) it induces the breath.
The equalizer for TRS track is not effective, just enough as rglage. In gnral I do not use it.

I possde this table for four months.

I had a weird problem with beginners and if it uses relatively silent during the long Journe (gnral in more than two hours in a row) it s' lit if it is off again later or even the next day. It starts operating in two days. This happened to me 5 times and I have had this problem later.

His lack of body and its too pramplis crystalline level is very weak. To be used only with external pramplis.

The dual effects processor is convenient but not adjustable.

It s'insre trs well in a home studio and can be done by hand and sound.

This table is of the same affordable trs (500 euros) compared to those of the same CATEGORY in other brands that are prs 3 times more expensive. (It's behringer!) But I have a friend who had to change three times the table because they had problem plant. Do not have bad luck ...
See the source
Did you find this review helpful?yesno