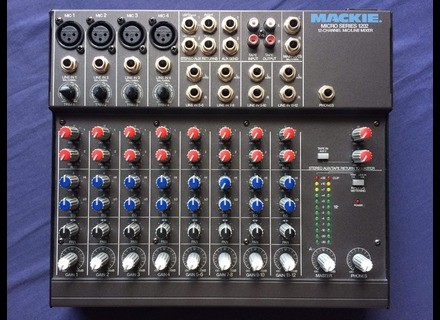 MS1202, Analog Mixer from Mackie in the Micro series.

Buy this productView price information >
View other reviews for this product:
This is a rackable, twelve channel board with two aux sends and two band EQ.

The set up on this unit is easy and straight forward and the manula is super easy to use.

This is a quiet, muti pupose mixer.

One thing that today’s studios cannot get enough of is mixers. You need a way to get everything into your system and with all that gear you can either buy one LARGE mixer if the budget is good or get a lot of smaller mixers to sub mix everything.

Granted, a larger mixer is more convenient and makes life easier if you have the cash, but the smaller units can get the job done and give you more money for other gear.

Enter the older Mackie Micro Series Mixer. The Swiss army knife of audio mixing. I bought mine in 1989 and still use it every day and have had ZERO problems and even less complaints on it.

The main use in my studio for this one is as a keyboard and tone module sub mixer. I get two full effects sends and Bass and Treble control for four mono and four stereo sources from a space about the size of a cigar box.

The biggest compliant, if you want to call it that, is that the volume controls are rotary and not faders.

While on the surface this is a drawback, for keyboards and tone modules, and even when using as a drum sub mixer, it can actually be a blessing.

My mixer sits up and the knobs are easy to see and actually allow the mixer to be smaller in size that it would be with a linear fader so it can fit in more places than you might imagine.

The unit is well crafted in solid metal that shields it and makes it quite durable, as I said, I have had mine in DAILY use now for nearly twenty years.

It will make a cost effective addition to your studio gear and at the going rate, you can actually afford several of them for various things and still pocket enough money to get yourself a decent Mic.
Did you find this review helpful?yesno